7:00pm – New Melanie quote: “Oh blah blah blah” when seeing a Coke commercial. She is a proud representative of the Pepsi Megacorp.

Even if you’re “not into farts,” you’d be pretty psyched about what I just did.

7:06pm – And a relatively boring first quarter comes to an end with the Ravens on top 7-3.

7:07pm – New trailer for “Fast and Furious 6.” Yes, it might be brainless popcorn action, but it’s eminently watchable. Sign me up.

these dudes are STILL fast and furious?

7:10pm – And our first shot of the Harbaugh family. The over/under on CBS shots of them is 6.5, last I checked. This being the 2nd quarter already, gamblers everywhere are sweating profusely.

This game is boring, can @ludacris drive on the field in a tank and crush a large plane or something? #Fast6

7:25pm – We are all witnesses to the first-ever “good” GoDaddy.com commercial.

7:26pm – Apologies to all fans of CBS programming.

7:29pm – I guess Ed Reed is out of the locker room. Interception! Oh boy, fighting and/or religious fantacism rearing its head at midfield. #29 of the 49ers is acting like a 4-year old who had his toys taken away. Throw him out, please.

7:30pm – Phil Simms under the impression he’s been commentating on baseball games all these years, referring to Ed Reed as a “center fielder.” (Yes, I know it’s not uncommon to refer to a safety as a center fielder; I just wanted an excuse to make fun of Phil Simms.)

7:38pm – I just jotted down “Golden Boy” to my list of TV shows I’ll be sure to not watch. #NoMoreCopShowsUnlessItInvolvesTimeTravelOrTheDharmaInstitute

8:09pm – Just took a breather to stuff our faces with pizza and wings. The frequency of posts from here on out will likely decrease drastically, especially in light of this relative snoozer of a game.

8:10pm – And Beyonce’s halftime show begins with a crowd of paid “fans” (extras) storming the field. OH GOD THE SUPERDOME ROOF IS ON FIRE! 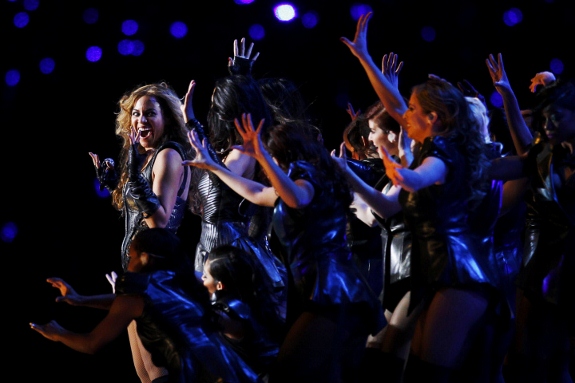 Alicia Keys just heard worriedly yelling at the Beyonce performance “that …girl … is on fire!!!!”

that was a great boner time show.

8:32pm – Lots of laughs here in the room as we read #beyonce tweets on Twitter. The vast majority of them contain the word, “boner.” Just stating facts.

8:32pm – And we’re back for the 2nd half and Jacoby Jones takes it 109 yards for a touchdown on the kickoff!! Wow. That might be game over. Worst case scenario for the 49ers.

This is the best thing ever

Is BANE about to come out, what’s up with the Lights?

8:42pm – And 4-time Super Bowl participant Steve Tasker has his big shot at superstardom! Show us why you deserve to be in the Hall of Fame, Steve. Just, whatever you do, don’t say the word, “vehicle.”

Weird smells, a.c. out, getting hotter and stranger by the minute at Superdome..Ravens sitting on field, Niners on bench

WHOA WHOA WHOA. Is this power outage a Fast 6 tie in?? IS THE ROCK ABOUT TO FLY A HELICOPTER THROUGH A TANK?!!

CBS didn’t have a contingency plan, leading to …….Steve Tasker!

Shannon Sharpe auditioned for CBS against Leon Spinks, Mushmouth, an alligator, and a pile of sliced ham.

Pretty sure Bill Cowher’s had six beers since they went off the air before kickoff.