I was lying in bed a couple of months ago and I started reflecting back to my Martial Arts career as a fighter. I remembered back to 1974, when I decided to retire after six years as the undefeated World Middleweight Karate Champion. I thought that I could defend my title again in 1975 at the age of 35 and win my seventh consecutive year, but then again I could probably lose, so I decided to retire as an undefeated champion. To this day I am considered one of the top fighters of all time. If I had fought and lost, that may not have been the case.

Then I began thinking about Walker, Texas Ranger. Fortunately, Walker has been a top rated series for eight years and I thought it could probably have a successful ninth season, but then again maybe not. Anyway that is the reason I am ending Walker, Texas Ranger. I want the series to end as a winner. I know the let down of Walker being over will be very emotionally hard on me, just as it did when I retired as a fighter, but I did not stop doing my Martial Arts when I retired and I will not stop acting when Walker is over. I hope whenever my acting career goes that I will still have your support! As I have always believed, “When one door closes, a bigger one opens.”

(as in “I wonder how many feet of snow I’ll have to dig through to find my car tomorrow.”)

For everyone who “misses” dear old Buffalo, here is what you missed by not coming home for Thanksgiving:

The plow guys in Buffalo must be enjoying a vacation day, or else they just suck terribly at their job. There’s a narrow lane about 10 feet wide in the center of the Delaware Avenue (arguably Buffalo’s main road/street). I guess, if the goal is to cause a 187% increase in accidents, the Buffalo Department of Public Works has done their job. It’s still snowing like a son of a bitch as I write this, so I’m looking forward to the 85 minutes it will take me to drive 6 miles to work tomorrow.

Ross, I’m outposting you about 5-to-1. Look at this post right now–it took little to no effort, yet still manages to entertain.

The quote of the day, courtesy of the Howard Stern show:

I added a section for capsule reviews of flicks I’ve seen, but don’t want to write a 5-page dissertation on, under the Reports & Reviews page. I’ll try to write a few sentences on whatever movie I’ve seen most recently, regardless of how much I enjoyed it or not. I offer this as yet another service to you, the reader, in the hopes that I will more fully enrich your day-to-day lives. This follows in the great tradition of the Question of the Week, the Secret Page, and my 404 Error page. It’s still a work in progress at this point, so plan accordingly. 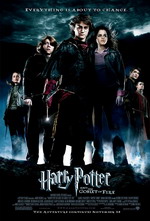 ‘Aary Potter! makes his return to the big screen in the 4th entry in the Potter franchise. I saw this on an IMAX screen and recommend you do the same if you’re going to see it. Potter and company’s adventures take them through the Tri-Wizard Tournament at Hogwart’s, and the movie primarily focuses on events central to that tournament. Heaps of material have been left out from the book, but rightly so, as it’d be tough to sell a 7-hour movie. Goblet of Fire doesn’t suffer for it, though. It has plenty of character development, and a clear, entertaining plot to make it a successfull entry into the franchise. The acting can be a bit spotty throughout, but the CG and action sequences are the strongest they’ve been thus far. Very entertaining flick, and well worth seeing. Don’t buy into the fact that these are “kids movies” or even books, for that matter. The movies and books work on both levels exceedingly well–there’s something good to be found for all ages. In light of the above news story, I thought I’d describe just what I’d do with $315 million. I think the tendency for most when they hypothesize about this kind of thing is to come up with a bunch of philanthropic endeavors along with their inevitable selection of a sports car with rocket engines to spend the newfound wealth upon. I shall be no different.

So, figuring you get a lump sum of maybe 40%, you’ve got about $126 million to work with. After taxes, you’re left with maybe $6.50. AHAHAHAHAHAHA, I made a hilarious joke about the IRS screwing you in the ass!

Anyway, you’ve got maybe $80-90 million after taxes. If you’re any kind of a decent human being, you spend maybe 5% on spreading goodwill toward men. I’d pay off my family’s bills and I’d probably donate a few million to the American Red Cross. But to make it more fun, I’d pick some underprivileged children and buy them all Segways and then watch the chaos that will ensue after I’ve put them in a small, enclosed space. I’d probably buy them some food and clothes, too, but the emphasis should be on the Segways.

At some point, I’ve gotta pay off all the debt I’ve accumulated over these 25 short years, but that’s a drop in the bucket compared to my now-augmented bank account balance. So pay off all the credit cards, the car, student loans, child support for my seven kids, bribes to that zookeeper in South Dakota to cover up the chimp kidnappings, and my apartment rent.

After the philanthropic tendencies have been sated, it’s time to make your money work for you. I’d hire a reliable accountant and broker to help me manage my cash; investing in Roth IRA’s, CD’s, high-yield bonds, pork belly futures, and a diverse selection of mutual funds, all designed to net me a 43% increase in net worth. That all sounds good, right?

All accountants are out to get your money though, so I’d have to set aside about $14 million to track him down after he’s skipped the country with half my money. Costs would include hiring an elite team of mercenary assassins, travel expenses (helicopter, private jet, amphibious armored personnel carriers, etc.), pay-offs to the local corrupt judiciary in the Caymans, and of course, the diamond-plated bullet enscribed with the accountant’s name that will be used to “get my money back.” This will take place on the side of a volcano, lava rivers surrounding us, the accountant writhing in pain after being shot in the knee. A helicopter will arrive, drop a ladder which I will hop on, and I’ll then shoot the accountant in the ass and yell out “this town needs an enema.” I’d then laugh like a schoolgirl and fly away.

After that mess, it’s time to “live a little,” as the Mayan gods once said. The next order of business is to get two new cars: one ultra-sportscar in the Ferrari vein, preferably in midnight blue and with mandatory doors that slide up instead of out. The other car would be tailor-made for offroading, probably a fully-customized Hummer that features a roof-mounted cannon capable of firing both explosives and candy at high speeds.

I’d then buy two or three homes, probably an apartment in NYC, a lodge in the mountains of Colorado, and a giant beach house in Malibu. All of these would have seven TV’s and a movie theater, a Save Kenny court, and a football field. I’m a big fan of waterfalls, so those would have to be incorporated throughout the house, connected by rivers criss-crossing all over the house. You’d have to have some trees in there somewhere as well. All houses, as expected, would be staffed by the aformentioned chimps.

The most important action that I’d take after gaining all this phat cash is to quit my God damn job at Adelphia.

I have no idea what a Roth IRA is.