“The Korea Baseball Organization has been moved to rule that wearing cabbage leaves inside a baseball cap constitutes an “alien material” that may disrupt a game, prohibited according to the organization’s rules, the organization said in a statement Tuesday.”

My weekend has pretty much consisted of two things: packing stuff for the move to a new apartment, and seeing Batman Begins as many times as possible. I can’t tell you how much I loved this flick. Well, wait–actually I can–in an all-new review! Click below! Yeeha! Squirrel! 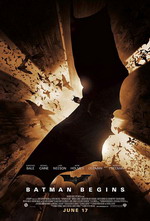 I seem to be at another crossroads, lifewise, and of course that justifies another rambling post here. I’m fast approaching my departure date from good old 499 South, finally, ready to move into an apartment closer to downtown B-lo, possibly in the Elmwood area (if that means anything to you). As I’ve told a few people, as long as it has a floor, ceiling and multiple walls, I’ll be happy for the moment. I suppose I should also require that it has enough closet space to conceal my giant bear costumes.

Hopefully, the move to my new place will also serve as impetus to finally get going with the career that’s been on the back burner for a while now: buildin’ planes. I’ve had interviews, polished my resume, and am now secure in the fact that I’ve become a professional interviewee. But how to parlay that into cash-money-ho’s? I think I’ll seek the advice of Rick Rubin, as he is both wise and wealthy.

Seriously, though, I think I’m finally at the point where I’m “ready” to get going with the next phase of my life. Spending my days mired in the funk of a wholly unsatisfying Adelphia job is making me miserable and sapping the willpower I need to move on. Spending Memorial Day speaking with people who are furious with their anti-virus software can serve as an effective eye-opener.

I took a trip to the Jones’ Estate last weekend for a toss or two of the pigskin, some exquisite bacon-wrapped steak, and some reminiscing with Danny-boy and Justin. Said reminiscing consisting mainly of PJ, Justin’s unending search for all the earth’s STD’s, and the trials and tribulations of Dan’s love life. Enlightening. Frightening. Light…ening. [insert similarly structured word most appropriate in evoking a thought-provoking response]

I’ve spoken with a bunch of you EA folk over email; good to hear all is going well despite the rapid descent into ghetto-speak and hope to see all of you come August when another of us bites the dust and ties the knot.

Until next time, always watch your back–you never know when “Smitty” is watching…

Justin recently asked me who would win a battle between Hurricane Vin Diesel and Vin Diesel.