An absolutely amazing show. Having become familiar with the rest of the shows on the first leg of Pearl Jam’s Riot Act tour, the Buffalo show on May 2nd was not only the longest up to that point, but also the most electric and engaging of any of the previous shows; “one for the ages” as a Buffalo News reviewer put it.

Personally, I could not have asked for a better show, having been such a huge fan of the band for the last ten years. And unexpected as well; the last time PJ played Buffalo, it was less than extraordinary. Regardless, when I first entered the arena, Eddie was just taking the stage to play a great solo version of ‘You’ve Got To Hide Your Love Away’–a nice surprise for those that showed up “early.”

Sparta wasn’t half bad, I hadn’t heard much of their stuff prior to that night, but was impressed enough to illegally download some of their music. Anyway, on to the good stuff: the band came out as the lights went down and I felt a jolt when I heard Boom Gaspar’s keyboard come to life for ‘Love Boat Captain,’ possibly my favorite track off Riot Act. Immediately after, quite possibly my favorite track off Yield, ‘Brain of J,’ I figured we were in for a good night, as the band was as tight as I’d ever heard them (in person or via mp3 or otherwise).

They kept on rockin’ (sorry) through some great songs (including I Got Shit, my favorite song of theirs) and wrapped the first chapter of the concert with a driving ‘Go.’ They came back and did their weird ‘Free Jazz’ cover and then hit the audience with a fantastic version of The Police’s ‘Driven to Tears’–although I think PJ does the song better.

One of the true high points of the night was ‘Crazy Mary.’ From Boom’s frenetic and wrenching keyboard solo (as wrenching as a keyboard solo can be…) to McCready’s tandem duet with him, it was simply awesome. Other highlights were the inclusion of ‘Smile’ on the setlist (gotta love that harmonica), Sonic Reducer, Fortunate Son (CCR), and an inspiring version of Patti Smith’s ‘People Have The Power,’ during which Ed brought a young girl onstage to hold the lyrics for him. Good stuff.

Also good was Vedder’s solo on ‘Soon Forget’ during which he serenaded a Bill Gates mask on a mike stand–a subtle but endearing ‘fuck you’ to the Seattle mogul.

PJ wrapped up with an epic final encore of The Who’s ‘Baba O’Riley’ and the quintessential show closer ‘Yellow Ledbetter.’ One image I’ll never forget is Jeff Ament during Mike McCready’s final Ledbetter solo: he was standing behind Mike’s amp, staring at the crowd with a huge smile on his face. The crowd was also amazing this night, singing along with each and every song, sometimes outdoing Vedder himself.

Definitely a show for the ages, one that PJ will be hard-pressed to outdo for the rest of this tour (don’t believe the stuff you hear about the Penn State show the next night, Buffalo was clearly the better show in my humble opinion). Thanks, PJ. 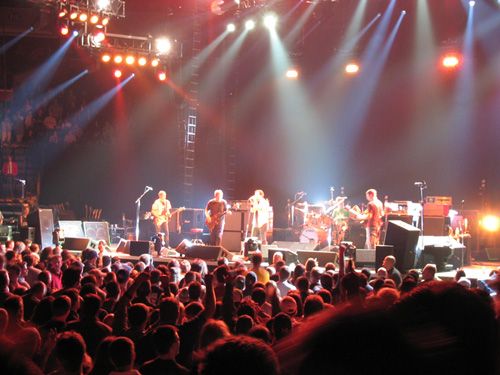 During ‘Hail Hail,’ Ed forgets the next line after, “I get the words and then I get to thinking …” and says “What’s the next line, I always forget,” not missing a beat. No talk until after ‘I Got Shit’: “Here it is, the second-to-last night of the tour of this leg … going home for a while after this and watch the world turn round … You’d always think that … you’d want to see a band on their last night … that’s when they’d really let it all hang out … but being in the band, we realize it’s different … it’s really the second-to-last show” [that is the special one]. ‘Faithfull’ is subbed into the setlist in response to a sign on Mike’s side, gets off to a bad start and is restarted. ‘GTF’ is dedicated to Buffalo filmmaker Vincent Gallo. Wishlist’ is stretched to 9 minutes and contains a lovely tag, including:
“… I wish that I was a disease, a disease called love and peace
and I wish that I could spread, to every person in the land
and I know that eventually, and I hope that eventually
and I feel, I feel, feel; that it wont happen without you and me
it’ll take you and me, it’ll take you and me
and more than me, it’ll take you
and more than me, it starts with two
and then becomes ten; and then becomes ten thousand
and then becomes ten million; and then becomes … the truth
the truth, the future, and the truth
send home those troops, come on troops
seek more troops …”
Returning for the encore, the band seems to have trouble getting started and go into ‘Free Jazz,’ with Mike yelling “jazz jazz jazz … experimental jazz!” until they find their way to the start of ‘Driven To Tears.’ At the start of the second encore, Ed notes toasts Buffalo, noting that they make the best Mozzarella in the world and he observes that venues such as the HSBC Arena often have curfews, and that breaking them costs bands lots of money. As people start booing, he says, “Mike McCready is gonna pay the fine tonight,” (prompting a “Mike” chant). He then introduces Luke the uke and plops a Bill Gates mask atop the mic stand. Ed is confused whether the crowd is saying “Luuuuke” or booing. “Are you angry that it’s black and white and not red, white and blue?” He talks about the mask, commenting, “He’s a skinny little guy … note the size of his penis,” (or lack of same, as he sizes up the mic stand) leading to ‘Soon Forget.’ ‘Smile’ is played by request for a group of friends who attended the Uniondale show and held up various signs and towels with ‘Smile’ written on them. (After the Bushleaguer incident, Ed sees the ‘Smile’ signs and says to the group, “tomorrow night, tomorrow night, next show,” and the band delivers.) For ‘People Have the Power,’ Ed invites a young lady (“Nana, from the heart of Buffalo”) on stage to hold the lyrics up for him. At first she seems nervous, but as the song progresses, she is more confident and by the end, is rocking right out. Great singalong and a long, impassioned, powerful version with the crowd chanting back the chorus, Eddie yelling “let’s hear you!!” and asking, “It’s the ultimate goal, yeah?” Ed and Nana do a back-to-back lean, and Nana helps sing the closing chorus into the mic. At the song’s end, Ed gives her a great, dramatic dip. This version is so good that most thought it was the close of the show and are stunned when the band returns for the third encore. When they come back to the stage, Ed says, “We had a democratic vote backstage and the verdict was: It’s Friday night … what the fuck.” At the beginning of ‘Baba,’ the house lights are turned up and people from the stands rush the floor area as security give up trying to control the crowd as the band and the audience go crazy. Classic show.