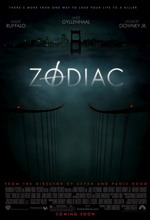 A quick word of warning. While this film is faithfully based on real-life events, I’m sure there are many people completely unaware of the full details of the case and its current status. Thus, it’s probably not a good idea to read this review before first familiarizing yourself with the case and/or seeing the flick. If you’ve got next to no working knowledge of the story, then I’ll just leave you with my urging to see the flick. It’s great. Spoilers abound in the review below.

The epic film adaptation of the grisly Zodiac killings in 1960’s San Francisco has arrived, courtesy of the reliable hands of director David Fincher. Aside from the fascinating story itself, Fincher is one of the great American directors working in film today, and his name in the credits is enough for me to hop onboard. The subject matter itself, though, is the big attraction here. I’ll leave it to Wikipedia to summarize the high points:

The Zodiac Killer was a serial killer who operated in Northern California for ten months in the late 1960s. He coined his name in a series of taunting letters he sent to the press until 1974. His letters included four cryptograms, three of which have yet to be solved.

The killer’s identity remains unknown. The San Francisco Police Department marked its investigation “inactive” in April 2004 and reopened it some time before March 2007. The case remains open in other jurisdictions as well. [Wikipedia]

I’ll try to leave my analysis of the killings and surrounding hoopla out of my review and stick to the film elements themselves, but it’s hard to separate the two. The story is so captivating that it’s easy to become obsessed with it. In fact, after seeing the movie today, I headed to the bookstore to pick up Graysmith’s two Zodiac books, “Zodiac” and “Zodiac Unmasked.” If not for having to write this review, I’d probably already be ripping right through the first book while Googling any and all things Zodiac Killer. In fact, I think I need to go now. Wait, lemme finish the review first. It’s that same obsessiveness to the events of the film and crimes that really serves as it’s central theme. Everyone involved in the case became obsessed with it, hunting down every lead and tip with a singular focus, much to the detriment of the other facets of their lives (their families, chiefly). Marriages are ruined, the course of lives are changed, families are destroyed all as a result of the Zodiac Killer’s homicidal traversal through Northern California.

The film itself, then. Fincher has really come into his own as a visual filmmaker–an actual artist, as it were. I hate using the term, “artist” whenever discussing filmmakers, but it’s as much a visual medium as oil paints and sculptor’s clay, so why not? You could snap a freeze frame of nearly every shot in the film and come away with something dynamic, bordering on true art. There’s so much to see in every frame (and I don’t mean “so much to see” in the vein of Star Wars: “oh look, there’s a squirrel-shaped starship six miles away behind that flying wookiee!”). And to think there’s two hours and forty minutes’ worth of frames to look at. 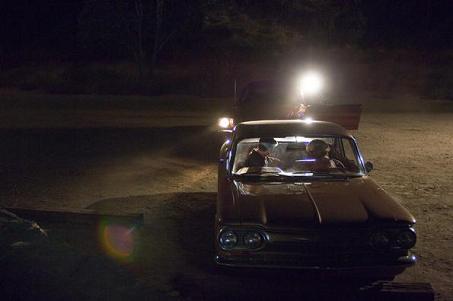 That 2:40 running time shouldn’t scare you off (if you haven’t already seen Zodiac); while the film shifts in tone and pacing a couple of times, it’s never to the point that you’re bored or waiting for the next big, dramatic plot device. Once you witness the Zodiac’s first onscreen murders, you’re strapped in and ready to ride until the end credits roll. I keep using the word, “fascinating” too often, but the story is just that. You can’t help but get wrapped up in it. When filmmakers are at the top of their game and have a great script/story to work with, length is a trivial concern. I could’ve sat through another two hours of screen time.

There’s a dark, tense quality to the film’s first acts; Fincher is a master at establishing this kind of foreboding tension, and he succeeds in maintaining it through much of the remainder of the film. There is some tension lost, however, around the 2-hour mark, which happens to coincide with the essential cooling off of the Zodiac case itself in the plot. While the movie doesn’t suffer for it, the sudden shift in tone felt a bit weird, from the slightly more “upbeat” characterizations and even music. That’s not to say that it all of a sudden becomes a buddy cop movie with big explosions, jokes and car chases–it’s simply like experiencing a sudden change from night to day–both literally and figuratively in the narrative sense.

Acting-wise, I was impressed with most everyone. I’m not sure I like the casting of Gyllenhaal as San Francisco Chronicle cartoonist Robert Graysmith. I’m not familiar enough with the writer/cartoonist himself to make a judgment on who should portray him, but I don’t think Jake brought enough age to the central role in the film. He’s certainly not a bad actor–he does a good job here–it’s just that when I think of the character sketch–“a political cartoonist working for a major newspaper who becomes obsessed with a series of high-profile serial murders and makes it his mission in life to help uncover the killer’s identity”–I don’t think of the gay cowboy from Brokeback Mountain. The guy playing chief suspect Arthur Leigh Allen is really great–it’s amazing to think how many actors like him are working that most people don’t even know about. Despite my earlier comments about Gyllenhaal, there’s a scene near the end of the film between Graysmith and Arthur Leigh Allen that is just riveting, and if it took place in real life, is all the more powerful as it likely serves as the defining moment that led to Graysmith’s real-life certainty that the Zodiac Killer was none other than Allen.

The conclusion to the actual film is altogether frustrating–but not because of any fault of the filmmakers. On the contrary, it’s an excellent film from frame one to the end credits. It’s the reality of the film’s story that frustrates because this is a case that was never concretely solved. Graysmith (and Fincher) certainly target one particular suspect against whom all the evidence is stacked, but we’ll never know with 100% certainty who the Zodiac killer was. Odds are it’s the guy inferred in the film’s conclusion, but again, there’s no way to know for sure. And that makes for an “incomplete” but wholly engrossing conclusion to the story, one sure to leave you thinking and researching well after you leave the theater. It’s hard to ask for much more from a picture. Now, if you’ll excuse me, I have some obsessive reading to do.