So, I’ve had a lot to keep me busy here. Despite all the flawed athletes these games sometimes have, there are just as many–more, actually–that hold true to that Olympic ideal, that have worked and trained tirelessly for just a shot, just a chance at that fleeting glory of crossing that finish line in first and earning your way onto the podium with a gold medal around your neck and your national anthem blaring as your flag is raised. That can be a powerful image in and of itself and I’ve got a lot of admiration for the men and women who do it.

Oh wait, I forgot to talk about the laughable US Mens hockey team. I thought the Olympics were supposed to the peak of amateur athletics–amateur athletics. How they justify having NHL players (and NBA players in the Summer Games) at the Olympics is beyond me. And they can’t even win anyway! The US lost to Slovakia and tied Latvia. FREAKIN’ LATVIA! Latvia probably has a better hay-baling team than they do hockey! The lone bright spots are that Dominik Hasek got hurt (beat it, Ottawa) and Sabres netminder Ryan Miller was left off the team because idiot US Hockey GM Don Waddell is, well, an idiot. Miller can rest up and resume his proper spanking of the rest of the NHL when the league resumes play in another week.

As negative as this post has already been, I might as well pile on another rant about the prototype sweaters the US and Canadian hockey teams are wearing. They’re meant to be less restrictive, more form-fitting and could soon replace the NHL sweaters. I think they look like an old t-shirt someone got out of a hamper. 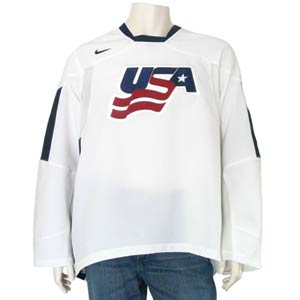 There, that’s another post in the books, thus providing further evidence of how much I pwn Ross.