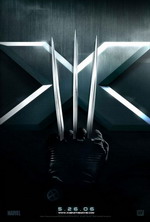 The final entry in the X-Men trilogy has arrived and while it has its share of fantastic moments and homages to the original comic book, as a whole it’s relatively underwhelming. It never transcends its genre and feels more like a cheesy comic book take-off than a real, slambang action movie with a soul (as X2 was).

The first flick was all about setting up authentic characters you could root for, if not relate to, while the second raised the bar a notch with the action X-Men comic fans had all been waiting for. The third time around, while there is certainly an emphasis on the action, the characters get lost in the mayhem. The acting is wooden pretty much all around, and when it is good, the dialogue is laugh-out-loud awful.

Halle Berry had been openly annoyed with the lack of work she had in the first two movies, and she seems to have gotten her wish this time around, as she features prominently. The problem is that it’s apparent she can’t act unless she’s naked on a couch with Billy Bob Thornton. As much as I liked some of the quotes lifted right from the books, it felt like they’d been shoehorned in to give the old “wink and a nod” to the fans. I think a lot of the unevenness of the movie is attributable to both the loss of X1 and X2 director Bryan Singer and the lack of adequate pre-production time for the movie. Fox, as it did with the first movie, rushed this through production, and X3 suffers for it. More time needed to be spent on the script and dialogue, as you’re never really given satisfying justifications for a lot of what’s taking place onscreen.

So, chalk X3 up as another mindless popcorn flick for the summer and you should enjoy it just fine. If you’re a diehard X-Men fan and are expecting the transcendent X-flick we’ve all been waiting for….keep waiting.