4:10pm Paula Abdul will be singing her “new single” later. Is there any chance at all that this will A) not suck and B) not be lip-synched?

4:18pm An awful commercial with Ben Roethlisberger singing. His high voice was bad enough; adding insult to injury was the fact that it was a promo for American Idol on Fox.

4:21pm Paula Abdul finally performs…if you can call trotting around the stage on her rickety legs “performing.” Lip-synching was really the only choice here, as I had earlier surmised, and the vocal track she’s moving her mouth in time with sounds like it was processed through eighteen different filters and mainframe supercomputers before it was eventually recorded. I’m also guessing there was no need for cables to be hooked to any of the instruments onstage either. It’s not good when the highlight of the performance is a weeble-wobble-like microphone stand that Paula flings back and forth.

5:06pm John Travolta should get his money back from the “doctor” who did his frightening hair plugs.

5:58pm Why are NFL players awkwardly reciting the Declaration of Independence, and who are those crazy people dressed as Ben Franklin, John Hancock and Thomas Jefferson? Ben Franklin’s joke about Hancock’s spectacles at the end was a real knee-slapper.

6:04pm Why does Joe Buck keep looking at co-announcer Troy Aikman like he wants to make out with him?

6:06pm Giant defensive end Michael Strahan sounds nervous as he’s interviewed outside the NY locker room. They’ve been pretty cocky in interviews in the past week. Is the enormity of the big stage hitting them now?

6:10pm What exactly is a “Pre-Kick Show?” Couldn’t this portion of Fox’s coverage be included in the “Pre-game Show?” Or would that rule out adding another sponsor to the list of 862 that’ve already had mentions in the past four hours?

6:13pm This is a ridiculous thought by me. As the teams were coming out onto the field, there were two rows of flag-bearers showing each team’s respective logo. The Giants came out first and the flags were raised without a hitch. The Patriots came out and one flag-bearer got his caught on another guy and took a second to come up. Less than…perfect, you might say? I don’t know why, but that bodes ill for the Patriots in my mind (which is why I will never come within 800 miles of playing in a professional sports league).

6:18pm National Anthem time. As much as I don’t like Fox hijacking the anthem so they can shoehorn an American Idol winner in to promote the show, Jordin Sparks did a great job.

6:26pm I love that head referee Mike Carey needs eight different NFL and Fox staffers to tell him how to do the coin toss.

6:35pm Manning looks good on the opening drive. Aikman mentions he was hyperventilating in the huddle during his first Super Bowl (against the Buffalo Bills). That makes me feel even better about the Bills getting blown out. Ugh.

6:38pm I hope you have an HDTV. I’m salivating as I see external shots of the mountains backdropping Glendale, Arizona.

6:50pm New England starts with a trick play? I don’t like the tone this sets, especially after New York just had a 10-minute drive in which they emphasized the run. Kinda reminds me of Super Bowl XXV, in which the Giants chewed up clock and kept the vaunted Bills offense off the field.

7:00pm Thank you, Terminator robot, for beating the crap out of that annoying Fox football robot. It’s about time.

7:01pm Patriots touchdown. The rout is on!

7:04pm Pats kicker Stephen Gostkowski sends kickoff out of bounds for a penalty. He’s no Adam Vinatieri, and seeing as New England’s three Super Bowl victories have come by an average of 3 points, you wonder if the young kicker’s inexperience on the big stage will come into play.

7:07pm Fox comes back from commercial with a shot of Tom Brady’s girlfriend, Giselle Bundchen, in a luxury box. 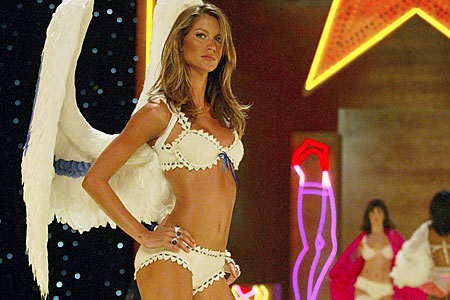 7:13pm The Giants ability to pick up the blitz will dictate whether or not the Giants have a chance to win. So far, so good…..aaaaand Eli just threw an interception as I wrote that.

7:54pm HALFTIME! This game’s going pretty quickly thus far. Despite the low 7-3 score, it’s been pretty entertaining. The Giants D has been extremely solid, but they need to score points early in the second half of they’re gonna be in trouble.

8:04pm Tom Petty & the Heartbreakers take the stage. Is it necessary to have all the fake “fans” run from the sidelines up to the stage at the beginning? Is that somehow symbolic of the youthful exuberance inherent in Super Bowl halftime shows? I’m guessing at least 14 people were trampled.

8:10pm Do you think Paula Abdul feels ashamed of herself when she watches a musician with actual talent perform live? Nah, me neither. She’s too hopped up on Prozac and Xanax to even know where she is, let alone understand what she’s seeing on TV.

8:24pm Semi-Pro trailer featuring Will Ferrell. Sign me up.

8:34pm That seems like an iffy challenge for too many men on the field by New England. Based on that first, quick replay, it’s gonna be too close to call if the Giants player was off the field by the time the ball was snapped.

8:37pm …or not. Looks that Belichick made a good call to challenge the play. The Giants player was clearly on the field by a step or two when the ball was snapped. That’s why he’s a football genius making millions and I’m sitting on the couch typing about it. My beer tastes good, though. 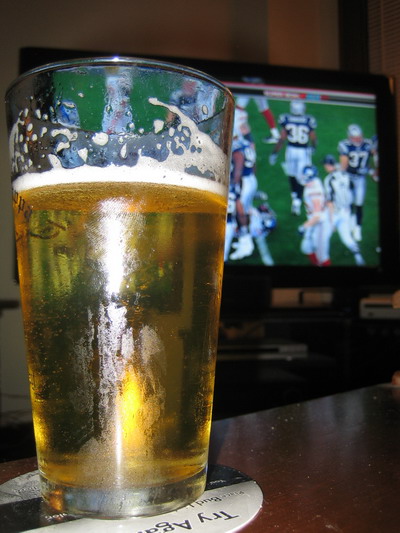 Regardless of the challenge, I’m kind of mystified that the play was even challengeable in the first place. It felt pretty cheap AND the Pats had an entire TV timeout to look at it. BS.

8:43pm Dicey call by the Pats to go for it on 4th and 13 despite being in field goal range. It’s the 3rd quarter and a total of 10 points have been scored. Points are in short supply and they just threw away a chance for three.

8:46pm The trailer for Pixar’s WALL-E looks great, if for no other reason than the technology and skill required to create it.

8:51pm The Giants’ 41-year old punter Jeff Feagles is the oldest player in the NFL and he immediately reminds me of Tecmo Bowl for the original Nintendo every time I hear his name.

8:57pm A riveting sideline report from Pam Oliver on the urgent delivery of bananas to the Giants locker room.

9:00pm Tom Brady has not looked very good, defensive pressure or no. When he’s had time, he’s underthrown some wide open receivers, like he just underthrew Randy Moss. I don’t like the Patriots gameplan either; they’re not running the ball enough. The Giants haven’t done much on offense, but if you give them enough time, they might exploit the fact that New England’s not using enough of the clock. Still, the Pats are up 7-3 right now.

9:07pm The Giants might be one big play away from winning this game. The Patriots are doing nothing on offense, thanks mainly to the ferocious NY pass rush.

Why is injured Giants tight end Jeremy Shockey in a luxury box? I see plenty of injured Giants on the sideline. Why isn’t Shockey? What a great teammate. It might be no coincidence that the Giants got hot when Shockey went on injured reserve. 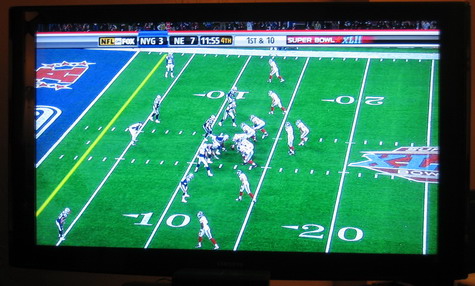 9:11pm Giants touchdown. Uh-oh, New England. It’s the 4th quarter and the Giants are up by 3. Wow

9:18pm Another overthrow by Tom Brady. That, along with penalties, are killing the Pats.

9:29pm Another catch for Wes Welker, who’s about to tie the Super Bowl record for receptions. If the Pats win, he’s the MVP.

9:34pm All-out effort by the Giants defensive line seems to be catching up with them. They look very tired on the sidelines. New England’s not taking advantage, though. Bad play-calling; they’re too pass-happy, especially when Brady has been so off all night.

9:35pm Troy Aikman talks about his marvel at seeing Brady so “calm and collected” at this stage of the game. If he’s so calm, why did he badly miss a wide-open Randy Moss in the end zone?

9:39pm Touchdown Pats. Never doubt them. Now it’s up to the New England defense to secure the team’s 4th win.

9:42pm Kick returner Domenick Hixon (you may remember him as the guy who hit Bills TE Kevin Everett on opening day) just got JACKED UP by Pats special teamer Ray Ventrone. I hope Hixon was wearing a cup.

9:43pm Pretty good crowd, as Super Bowls go. It sounds pretty lively on both sides as they try to disrupt the opposing offense with noise.

9:44pm Now is the time for Eli Manning. This could be a career-defining drive to win the Super Bowl.

9:45pm Two-minute warning. This has been a great game, folks.

9:53pm Manning sacked. The Giants use their last timeout with 0:51 left. It’s 2nd & 11 on the Pats 25-yard line. This is tense, and I hate both teams. God forbid the Bills were ever in this situation, I’d have had three heart attacks by this point.

10:00pm 28 seconds left for Brady after the kickoff. 3 timeouts left to go 80 yards. Final Countdown is appropriately playing over the stadium PA.

Everyone storms onto the field despite there being 1 second left on the game clock. Belichick doesn’t give a crap and heads to midfield to shake hands with Giants coach Tom Coughlin. Belichick exits the field with that one second still on the clock. Stay classy, Bill.

10:07pm Eli downs the ball and the New York Giants are champions of the world. 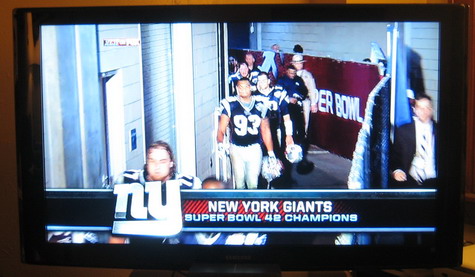 Shocking. WR Plaxico Burress cries when talking about what the win means to him. Great to see that kind of emotion from a pro athlete. 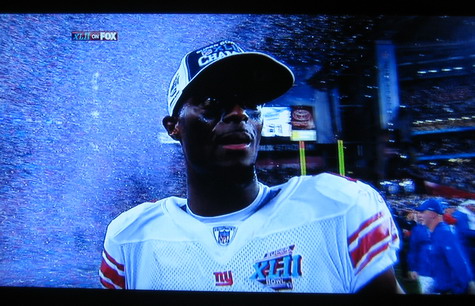 What. A. Game. A shocking win for the Giants, a 12-point underdog. Lots of fun to watch and I hope you all enjoyed it as well. I’m out.

12:13am (I had to add this.) ESPN is already playing a sorrowful, overly-melodramatic piece on the Patriots ultimate “failure” of a season. Ugh. It looks like they’ve had this ready for weeks. Woe, ESPN; woe.