As has become a little too common on this show, we had fifty-seven minutes of some relatively ho-hum exposition followed by three minutes or so or some awesome “WTF?!” action to get our minds pondering all manner of explanations for The Temple and why Richard took a dying Ben there. Despite my positing that 2007 Ben sent Sayid back to kill 1977 Ben so he could become a ghostly apparition capable of all manner of ethereal hijinx, I think we all had a sneaking suspicion young Ben hadn’t bit the proverbial (and literal, in this case) bullet. That sapped a bit of the tension out of what should have been an emotional sucker punch of a conclusion to last week’s episode. Ah, well. 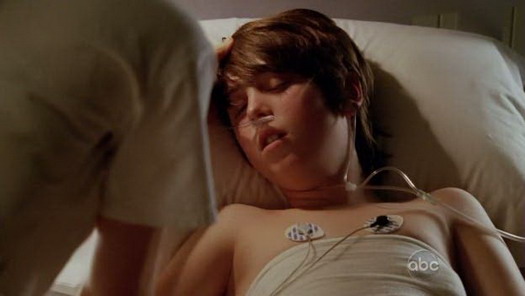 The conversation Hurley and Miles had about time travel was altogether appropriate, given the hard-to-figure nature of the timeline now that our castaways have gone and mucked things up. Or perhaps it was just Ben who mucked them up by turning the frozen donkey wheel. Miles tells Hurley (I’m guessing by way of Faraday’s time tutelage) that time is no longer flowing in a straight line for the castaways that have stayed on the Island. Their timeline has flowed (is that even a word?) like so: 2004, 2005, 1974, 1975, 1976, 1977. In that order. (I left out the schizophrenic time jumps that took place while the donkey wheel was still off its axis, but you get the idea.) 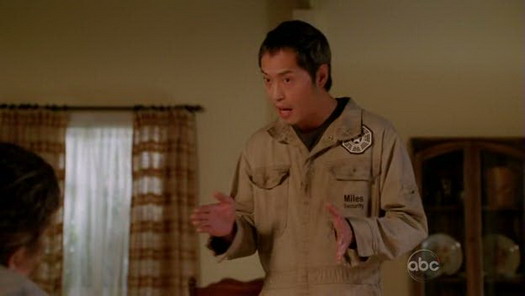 So once the time-jumping stopped and they settled in 1974 with Dharma, the “past” includes the Oceanic 815 crash, the freighter, etc. Their future at that point became 1974-1977. So the events of ’74-’77 had not happened yet in their timeline, so they would not remember them, and when they were still in 2004, that’s why there was no evidence they’d ever been there in the past. Now, say you were an independent observer watching all this from afar, away from the temporal effects of the Island and its donkey wheel. Time for you would flow “normally,” with 1974’s events certainly occurring before 2004’s. You’d see the castaways jumping all over the place in time, but you’d have a set frame of reference. The events that take place before your eyes in 1974 through 2004 would all occur and be set in stone, regardless of how whacked out it would appear to be for someone on the inside of that timeline.

As Miles put it best: “Hunh?” I’m not sure where I’m going with this either. But I’m reminded of Jeremy Bentham’s Panopticon (no, not Locke; the real Jeremy Bentham).

The Panopticon is a type of prison building designed by English philosopher and social theorist Jeremy Bentham in 1785. The concept of the design is to allow an observer to observe (-opticon) all (pan-) prisoners without the prisoners being able to tell whether they are being watched, thereby conveying what one architect has called the “sentiment of an invisible omniscience.” [Wikipedia]

So that central observer (Jacob? Ben?) has already seen everything that happens in the timeline. It’s set in stone. No matter how improbable it would seem to the castaways within that timeline, their future is set. It’s already happened, from the central observer’s perspective. Flashbacks aside, the audience is not jumping forward and backward through time with our castaways. We are seeing events as they play out…for them.

Yeah, I’m not sure what the hell I’m talking about either. Let’s move on.

One thought on “Whatever Happened, …aaah, whatever!”