Welcome back, one and all, to my pride and joy: the weekly Lost recap, where I rely on screenshots to distract you from my cobbled-together theories and treatises on the most insignificant details spread throughout the ABC show. Anyway, let’s get right to it. We open with the now-customary, season-opening closeup of an eye; said eye belonging to a woman waking up in her house in what appears to be Anytown, USA. 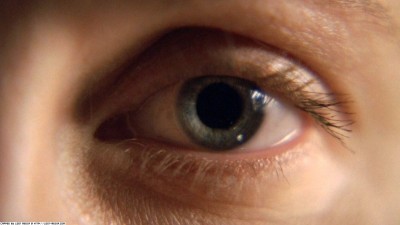 With a nod to one of the show’s most well-known fans in Stephen King (and his column in Entertainment Weekly), she heads up a book club consisting of others from the neigborhood. “Others,” indeed, as we find some familiar faces making an appearance when a familiar plane breaks apart overhead (we catch a nice glimpse of the electromagnetic pulse emanating from Swan Station as well–remember that this opening scene takes place on 9/22/04, the date and time Desmond nearly didn’t push The Button in time). We’re smack dab in the middle of the Others “town” on the Island, confirmed when “Henry Gale” appears and starts dispatching his Others to the crash sites (Ethan to the fuselage, Goodwin to the tail; which ended up being not so good for both of them). “Gale” certainly appears to be firmly in control of the situation in this utopian paradise. 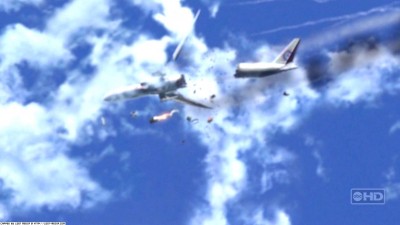 Once we get to Present Day again, we see our heroes locked up in various cages. An animal pen for Sawyer, a shark tank for Jack, and a, well, I guess Kate’s cage is that dress for now. Sawyer catches a gander of our newest Dharma station, with what appears to be some sort of aquatic/insectile creature for its logo. We later find out it’s a hydra; the station’s focus appears to be zoological. Zeke/Tom makes reference to the (polar) bears that were once housed there, and Juliet confirms Jack’s suspicions that sharks (and dolphins) were once housed in his cage/aquarium. The shark glimpsed way back in episode 2×03 was likely housed in one of the tanks Jack finds himself confined to at some time.

Kate, on the other hands, wakes up in a locker room under a clean-shaven Zeke/Tom’s watchful gaze and gets a hot shower and fresh clothing before being taken to a beachfront breakfast with Mr. “Gale.” When she was being led onto the beach and came into sight of Gale, you could sense the hesitation and fear in the Others’ manner. They seem to genuinely fear the nondescript Gale, for reasons we have yet to determine. If they’re “the good guys,” why do they so fear their leader? During the course of the breakfast, Gale makes reference to the next couple of weeks being “unpleasant.” No doubt the Others have some experiments in store for our three captured castaways. Sawyer’s apparently going to be subject to experiments meant for hungry bears.

Sawyer is housed in a pen across from another captive, who we’ve never seen before, a young guy named “Carl.” It would seem Carl’s been there a while, based on Zeke/Tom’s treatment of him after the escape attempt. An Other who’s fallen into Gale’s bad graces? Another castaway? We’ll find out down the line, I’m sure. 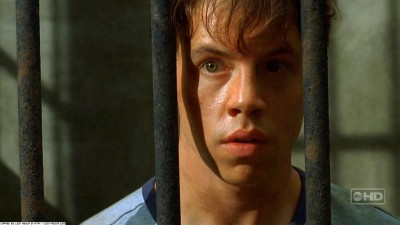 Much of the rest of the episode is spent divided between Jack’s flashbacks to his messy divorce with his wife and his interrogation/conversation with Juliet. We see a Jack we haven’t really seen yet: a jealous, angry man wanting to blame everyone else for what’s gone wrong for him, whether it be his father, his ex-wife, or her new husband. Jack may not be the all-American nice guy he’s been made out to be thus far. Gale referred to he and his group as “the good guys” in season two’s finale. As we begin to see more of Jack’s past, perhaps it’ll become more clear that he could be one of the “bad guys” after all (if you buy into Gale’s assertion). Both Kate and Sawyer have blood on their hands from past transgressions.

As far as Juliet, she’s clearly capable of manipulation (and shooting you with a taser gun) but also seems to have a capacity for kindness. Seeming to be a psychologist, she’s also armed for Jack’s interrogation/questioning with a knowledge of his entire life–about his ex-wife, whether or not she’s happy, Jack’s father, his death, etc. How exactly did she come into possession of such information on a deserted island far from civilization, with Jack having been on the island only 65 days? Clearly, the Others have connections to the outside world still, likely in the form of the Hanso Foundation. 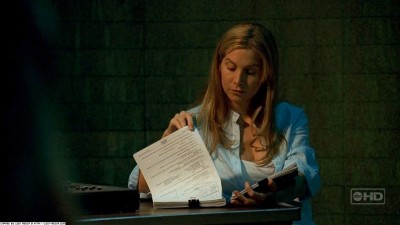 I have a feeling the Foundation is going to figure largely in season three, particularly having seen Sarah Widmore in the real world at the end of the season two finale. In fact, I think I might go as far as asserting that the outside world (and not in flashbacks) is going to have a much larger role during this season. Series co-creator Damon Lindelof alludes to a change midway through the season that will “really open things up” to a new direction. I can’t think of of a more concrete way to shift the show’s direction than to turn the focus away from the Island and back to “reality,” with or without the castaways. An obvious avenue to link the Island back to the real world is with Michael and Walt, as they’re undoubtedly making their way back to reality.

Other Stuff From Other Sources:

5 thoughts on “Welcome to Othertown, USA!”