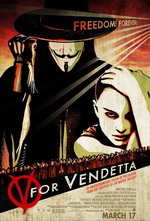 It’s easy to come away from V for Vendetta thinking it’s a direct assault on the current Bush Administration (and perhaps the UK’s prime minister as well) and a seemingly glorified account of a terrorist. But to sum up the film with such a narrow focus would be to do V for Vendetta enormous discredit. There will be people who see this and get annoyed at its liberal poke at the “fascist” Bush government, and those who will simply see it as a popcorn flick. I think it works on both levels pretty well, but I think the central theme of the movie transcends a simple critique of the current government. Yes, the content has obvious ties to what’s going on in the world today (Iraq, terrorism, religious intolerance, discrimination based on sexual orientation), but it’s much more than that. V for Vendetta is, quite simply, about the power of the Idea. Wearing the visage of 17th century religious freedom fighter-cum-terrorist Guy Fawkes, the title character “V” becomes a living Idea himself; a symbol the people will never forget and rally behind. V himself says it best: “Beneath this mask there is more than flesh. There is an idea, Mr. Creedy, and ideas are bulletproof.”

The Idea is something our governments, our religious leaders, and our media can try to suppress and manipulate, but they can never truly destroy it. They can never truly destroy the will an Idea can bring about in a group of people, whether it be 10 or 10,000. What V for Vendetta is truly about is that we should hold on to our Ideas, because they can bring about great, positive change when put to good use. At the same time, it can bring about great horror and destruction as well. Of central debate in the movie is whether or not terrorism is ever an acceptable avenue to voice one’s opinion or bring about change. It is a wholly relevant debate in light of today’s current political and social climates. 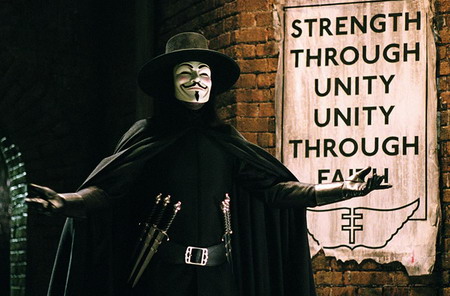 Based on the graphic novel by Alan Moore, the film itself is, in a word, great. While it can be incoherent in execution and tends to feel a bit disjointed at times, as a whole it is extremely entertaining, from V’s unforgettably written (by the Wachowski brothers) and delivered (by Hugo Weaving) dialogue to the fight sequences to the epic-in-scale action setpieces at the climax of the film. (I’ve gotta find a fantastic quote from early on in the film that makes full use of the V section of the dictionary. I’ll post it when I find it.) All the acting is first-rate, though Portman’s attempt at an English accent seems on the edge of barely passable. My favorite performance is John Hurt’s raging Chancellor Sutler, a megalomaniacal despot hell-bent on absolute control of his subjects. Irony-in-spades when you consider the star of 1984 is now playing Big Brother in V for Vendetta. The music is top-notch; Dario Marianelli’s score is a great, sweeping orchestral composition, and in the mix are masterpieces from history’s past. I don’t think I’ve ever enjoyed the 1812 Overture quite as much as I did here.

Repeat viewings are a must to fully appreciate what I’ve seen, but I would definitely recommend it to anyone who enjoys a good flick. Indeed, upon further reflection, I think some of the inherent symbolism of the movie is a bit too in-your-face and obvious at times, which wasn’t necessary. The filmgoing audience often isn’t given enough credit. Some, more than others, will be turned off by what they’d view as a “slap-in-the-face wake-up call” mentality of the movie–they’ll focus on the inherent liberalism of a movie bent on portraying George W. Bush as a fascist and glorifying the actions of a terrorist. Some will tend to focus more on what the implications of the film’s central Idea mean to our current government and the media that reports on their actions. Indeed, it forces you to question the true interests behind our current leaders and their actions. Some will focus simply on the fighting and explosions. And it works pretty well as a popcorn flick; fear not. In the end, what I find to be the greatest, single quality that V for Vendetta has to offer is that it will inspire debate and leave you thinking long after having left the theater.