The bad thing about tonight’s episode: it probably raises more questions than it answers. The good? The next episode is only six days away. Ignore that. It’s nice to know we’ve got an uninterrupted slate of new episodes from here on out. No more two and three-week hiatuses makes Lost fans happy, despite their apparently dwindling numbers. (Last week’s episode had a series-low audience of 12.78 million viewers.) I’m still enjoying the ride, questions be damned.

Thursday Morning Quarterback Edit: Ignore the preceding paragraph, preserved solely for posterity’s sake. I think I’m going to start waiting until the next day to publish these. My vast reservoir of writing talent can only truly come through after sixteen revisions. Plenty of questions raised and re-raised, but on the whole, last night’s episode had plenty of answers, albeit answers to (relatively) inconsequential questions.

I think the biggest item-of-note to take from “Enter 77” was the revelation of the Others being on the island long before the Dharma Initiative, when I tended to believe it was just the opposite. This is all under the assumption that Flame Station staffer Mikhail “Patchy” Bakunin was telling the truth to Sayid and Kate. 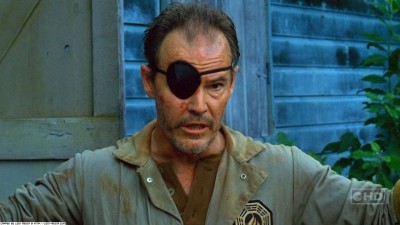 If I had to venture a guess, I’d say we’ll get to see the “purge” Mikhail referred to near the end of the season in flashback mode. That should make for a pretty good episode, neh? The bodies of Initiative members that keep popping up (the couple in the polar bear cave, Roger Work Man in the van) might offer a hint of what happened during the conflict. More specifically, I’d venture a guess (I’m doing a lot of venturing in this paragraph) that Mr. Work Man was attacked while driving the Dharma Bus.

As far as the aforementioned “weak” ratings, I think this episode will give the show a bit of a boost. The most interesting episodes of the series have typically centered around Locke and, to a lesser extent, Sayid. They’ve always been propulsive forces that drive the plot forward, in stark contrast to Jack, Kate and Sawyer’s lamer-by-the-second love triangle.