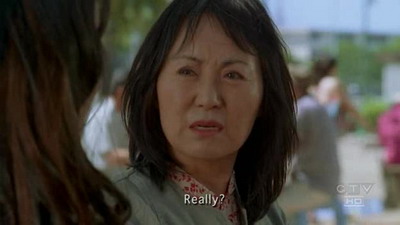 One of the early Lost, “what does it all mean?” theories centered around everyone in the world having a twin, with the infamous “Numbers” somehow signifying some commonalities or odds in calculating each twin’s life path and/or chance of meeting one another. One twist is that one twin’s good, the other evil. There was a tie-in novel called Bad Twin, which was written by a briefly-seen character on the show who died in the plane crash (remember the guy who was sucked into the engine?), and also happened to be Cindy the Flight Attendant’s significant other. You can search the various Lost sites on the web for that crap, as it gives me a headache even thinking about it.

Of course, none of this would explain how the Others had contact with the real world, Naomi was searching for Desmond (or was she?), and why Dharma keeps dropping food from the sky, but that’s for another day (and probably another season). Like I said, headache.

I’d like to know what the heck Juliet plans to do. If you hate Ben and his machinations, why keep going along with him? He ain’t letting you go, so why help him? That’s it for this week.