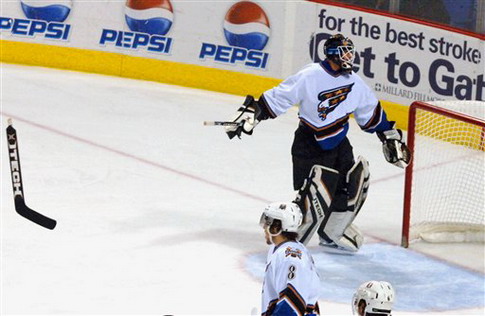 The game being pretty much over by the first intermission, the big subplot of the game involved Capitals forward and rising NHL superstar, Alexander Ovechkin. Having cheap-shotted Sabres F Danny Briere a few weeks back, Ovechkin’s found himself at the top of Sabres’ fans shitlist, and they let him know it every time he touched the puck on Tuesday night. He even acknowledged the resounding chorus of boo’s after his laser blast of a goal by holding his gloved hand up to his ear as he skated around the ice in his best Hulk Hogan imitation. Ass. Okay, well he may be an ass, but he’s also a helluva hockey player, and the NHL needs as many guys like Alex as they can get. Guys with an actual personality the league can market in its’ desperate search for new fans and revenue. Though the league might want to get him some English lessons. 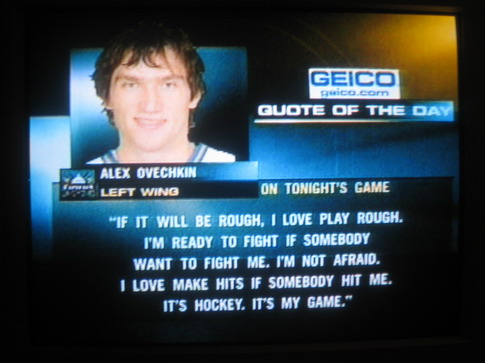 Briere later exacted some vengeance for the aforementioned cheap-shot by giving Ovechkin a spear to the groinal area in one of the corners. While I’m not happy with Briere’s spear, there’s something to be said for the old school mentality of “an eye for an eye” that may be wholly appropriate in these situations. The Sabres certainly aren’t regarded as having a lot of “team toughness” after losing players like Mike Grier, Jay McKee and Taylor Pyatt in the offseason; instead relying on team speed and finesse to get the job done (which looks like it’s working, eh?). Briere’s spear was one way of showing they’re not a team to be messed with. You take a shot at somebody and you can expect some retribution down the road.

As satisfying as this win and the season sweep over the ‘Canes was, they’ve still got a Cup and we don’t. Three games won before January won’t mean much come playoff time. That being said, I took great pleasure in Buffalo dispatching them. The Hurricanes are still a great team, especially in the physical sense; and they’re going to be there in the end (whatever “the end” happens to be). The Sabres took a pounding at the hands of Carolina’s great forecheck, and it looks like the after-effects of that carried over to Saturday night’s game against the Thrashers. 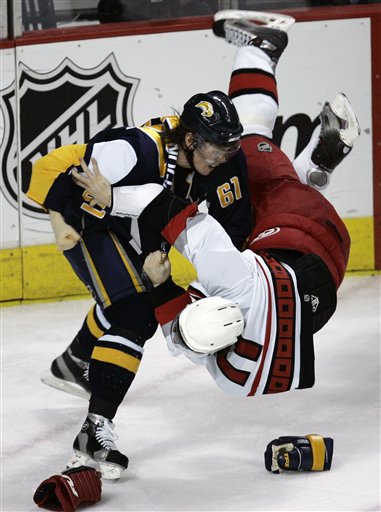 It was a shame that Ryan Miller’s shutout bid was spoiled by his letting in an awful goal under his right arm. He must’ve been in the midst of an mushroom flashback or something, because he typically gobbles shots like that right up. As great a win as this was, I’m sure Miller wasn’t too happy about that goal as he left the rink. Better a goal like that gets scored when you’re up by four goals in December than overtime in game 7 of a playoff series in May.

The team ended the week by taking on the 2nd best team in the Eastern Conference, and the Thrashers lived up to that billing; if not for some great goaltending from Ryan Miller in the 1st period, the Sabres could’ve found themselves in a hole early. Les Thrash have a ton of great goal scorers on their top lines, Ilya Kovalchuk, Marian Hossa, and Slava Kozlov most notably. You give them an inch of ice to work with and they’ll make you pay.

The win takes a bit of the sting out of the loss early in the season to stop Buffalo’s record-tying undefeated streak at 10 games, and in the larger sense, this game was a good litmus test for where the Sabres are. They’ve consistently been the best in the East, but it’s nice to get confirmation of that against a great team every now and then. Mission: accomplished for now. 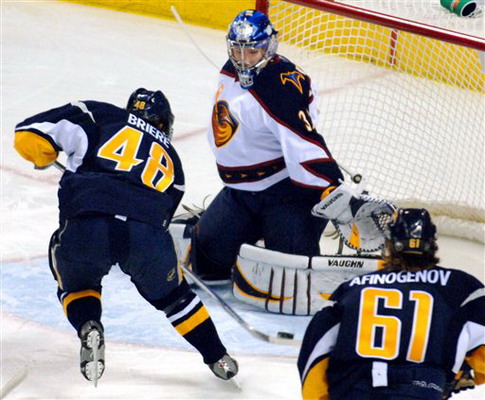 This was a standout game for Sabres forward Derek Roy, who singlehandedly killed off a penalty with some great skating and stick work, including a crazy-ridiculous breakaway shot from between his legs and behind him that almost beat Thrashers netminder Kari Lehtonen through the 5-hole.

One unfortunate trend I’ve noticed thus far in the Sabres’ season is forward Thomas Vanek’s penchant for pouting when he’s not the guy putting the puck in the net when he’s on the ice for a Buffalo goal. They’ve been winning consistently this year, so it’s not a real significant worry so far, but I get a little concerned about his attitude. This is a team that is likely going to lose Chris Drury next year–one of the team’s real character guys–and I’d like to see some new leaders begin to step up. Vanek got greedy on one three-on-one break in Saturday’s game, trying to shoot from two feet in front of Lehtonen instead of passing to his wide-open linemates for a 75% chance at a goal. He seems to be happy only when he’s the one putting the puck in the net; he was grinning from ear-to-ear and pumping his fists enthusiastically after he put the puck in the net a little later. A minor quibble on a team that has 59 points before the new year, so as long as the team keeps doing well, I’m not gonna worry about it right now.

Tonight marks the final stanza of 2006; here’s hoping you and yours have a safe, happy and healthy new year! Let’s all hope 2007 holds much laughter, merriment and hoisting of Stanley Cups!