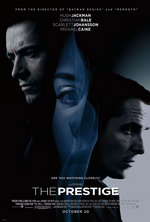 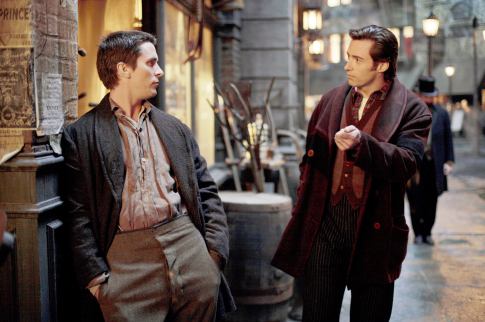 The direction, as I’ve come to expect from Nolan, is outstanding. There’s an overriding atmosphere of tense foreboding in each scene, even in seemingly benign moments like a conversation between a husband and wife. It suits the story in spades as we inch closer and closer to the film’s final reveal–its’ extraordinary Prestige. You’re never sure exactly where the film is going because of this atmosphere, but there are times where you dread what may be around the corner. I mean that in the most complimentary fashion possible. The film felt like an organic, pulsing entity enveloping you as the story develops–you can’t help but get caught up in it.

I don’t do exceedingly well at describing what I find to be “great” direction, but I think a lot of what I find great can be found in scenes with pretty much nothing going on that still gives the viewer some kind of visceral reaction–whether it be one of foreboding or joy or sadness or fear. There are shots in the film of nothing more than inanimate objects in a room or forest and they’re some of the most effective. I can’t quantify exactly what it is that makes such shots so good, but I recognize it when I see them. A great, atmospheric score from David Julyan helps a bit, as well.

The acting is pretty much uniformly excellent throughout, despite one or two very minor moments of unconvincing emotion from Hugh Jackman. Even David Bowie–yes, that David Bowie–turns in a credible performance as Serb-American inventor Nikola Tesla, the father of modern electricity.

His appearance in the film also provides a subplot mirroring that of our two main characters, involving an “electrifying” (har har) rivalry with fellow inventor Thomas Edison. Who knew Edison was actually a mad scientist with an army of thugs he could dispatch to beat down his rivals? The relationship between the two inventors, as I said, very much mirrors that of Angier (Jackman) and Borden (Bale) in the film: while Angier and Edison are the consummate showmen adept at captivating the audience with lesser magic, Borden and Tesla lack the ability to capture the audience despite having far greater raw talent.

But I digress. If the film hits a false note, it comes after the movie’s own “prestige.” There’s a certain point the film could’ve faded to black and thus kept the “secret” of the “trick” intact, even though there’s plenty of information presented prior to that moment to allow the viewer to figure it out. In fact, it becomes rather easy at one point to predict what’s coming. Even more reason to reveal less at The Prestige’s conclusion. Even so, the revelation isn’t presented to the viewer in the now-typical Hollywood fashion of beating one over the head with a giant sledgehammer of information. This isn’t an “oh my God, he’s actually a chick and is a magical werewolf!” twist; it’s an effective, thoughtful ending, one which is shocking more for its revelation of what our character(s) have become in the course of their pursuits to destroy one another, than it is for any revelation of a magic trick. It’s an appropriate third act for another terrific Christopher Nolan film. I can’t wait to see what he does next. Make sure you watch closely.