Last night’s dramatic shootout victory for the Sabres reminded me, not only of everything I love about sports, but also of its amazing power to lift spirits and heal a wounded community’s conscience, if only for a short while. Most of the area woke up to the terrible news of Flight 3407’s crash in Clarence Center the night before, 50 souls perishing in the tragedy. While we know the family members are linked to the crash, it’s striking how few degrees of separation there were between everyone else in the area and those lost.

“It’s an incredibly sad day for our city and we’ve talked about it, that this is going to reach and touch a lot of people,” Sabres coach Lindy Ruff said. “You’ve got to get through it. It’s an area where a lot of us live. Everybody is going to know somebody that’s touched by this. It’s a tough day for Buffalo. First and foremost, it’s all about the families of the people that were lost and all our feelings go out to them first. When it comes to something like this, it’s a tremendous tragedy.”

But the thing about those who are still here, those who choose to stay here; they’re all bonded somehow. Suffering the effects of job loss and economic hardship are bearable when people are together; it makes for the close-knit communities that shine through during a tragedy like this. You can lean on each other for support. And I saw that crystallized last night at HSBC Arena. The mood was somber, the game preceded by a moment of silence for the victims and their families. The sense of collective grief was tangible despite it being a Friday night at a sporting event.

And then the puck dropped and minds started to shift their focus to hockey instead of the sobering thoughts of those no longer with us. With every goal, the cheers got a little louder. Of course, as a Buffalo sports fan knows all too well, the good things have a way of being torn away at the last instant. Such seemed to be the case when the San Jose Sharks took a 5-4 lead in the 3rd period, heading for victory as the clock ticked down its final seconds. Thoughts may have started turning towards reality again.

But then something magic happened, something sports accels at; in an instant, the entire situation changed. The Sabres scored to tie the game with 3.9 seconds left on the clock, converting the increasingly quiet arena into a surging sea of euphoria and happiness. It’s just about the loudest I’ve heard any crowd at the arena in the years I’ve attended games. And the crowd just kept cheering, seemingly not wanting the moment of sheer joy end. They stayed on their feet and kept clapping and whooping, thankful for a few more minutes of fun. 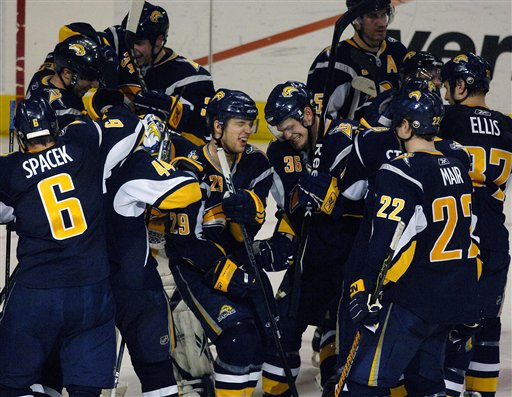 The eventual victory in the shootout was just the icing on the cake; it was almost secondary to that moment at the end of the 3rd period. For a few minutes, all was well. Those lost were not forgotten at that moment, but the energy sapped by grief was transformed into a basic feeling that everything was alright. I’d like to imagine the 50 souls looking down on HSBC Arena Friday night were cheering right along with us. I hope the families can find their way to imagine that, too. It would be another victory.

3 thoughts on “The Power of Sports”