Not quite as many sides as a Dharma logo, but it’s near enough to give me ammo to link it to the Dharma Initiative, in what is clearly a huge reach on my part. And the “Portland” in the mysterious Dr. Albert’s PowerPoint presentation looks suspiciously like Hawaii for reasons I’m sure no one can imagine. And by “Hawaii,” I mean the Island: 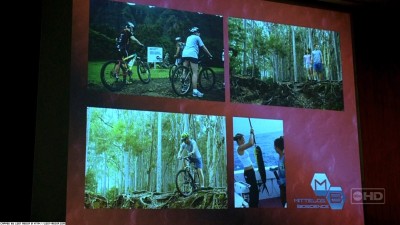 I think I get distracted by stuff like this–stuff that will undoubtedly become largely inconsequential by next episode–all too often, but it’s what I do. I digress yet again. One aspect or flaw of Juliet’s personality that becomes obvious is that she gets linked up with the wrong kind of men far too often. Her sleazy ex-husband Dr. Edmund Burke, the sure-to-be-evil Dr. Albert, and Chief Other Ben, who we learn has held her captive on the Island for 3 years, 2 months and 28 days. The prospect of ending that captivity is enough to make Juliet dissolve her tenuous alliance with Jack and force him to stitch up Ben’s back and save his life. Even inches from death itself, Ben still shows himself to be in control of all in his domain.

Including his daughter, who we find out to be little rebel Other Alex. From my vague recollections, Alex’s mother Danielle Rousseau had said her husband was dead, dying of the “sickness” that killed the rest of the crew on their ship. I guess “dying” is a relative term in Danielle’s world. (If you’re wildly confused by all the names I’m dropping at this point, not to worry, you can simply go back and watch the first two seasons on DVD right now. I’ll wait.)

I’ve got some more Lost-writing rust to shake off, so I’m going to devolve into bullet points now, but I think we’re set up for some pretty big reveals over the course of the remaining 15 episodes. I think those reveals will be big enough to completely change the direction and context of the show–we’ll find out nearly everything there is to know about the Island, and I have a feeling some of our castaways will be seeing the mainland in more than just flashbacks. You can’t count out another death or two, either. We don’t have all the answers yet, but I’m more than happy enough to sit back and enjoy the continuing ride toward the truth.