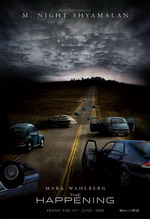 What the frick happened to M. Night Shyamalan? He hits his first two movies out of the park, in my mind (The Sixth Sense, Unbreakable) and since then has slowly devolved into a heavy-handed, melodramatic con artist of a writer and director whose crowning turd hits theaters today: The Happening. I liked Signs quite a bit, Lady in the Water a little less, and was mystified at some of the editing decisions made in The Village–decisions that effectively destroyed all semblance of tension and surprise in the movie’s final act. Shyamalan’s clearly a talented director, and has some good ideas in terms of storytelling, but the decisions he’s made as of late are baffling. But I digress. I’ll have some spoilers in the rest of my review, but I’ll save you your 12 bucks now:

There, now you have no need to see this snoozefest. On with the spoilers…

I had the premise behind the movie pretty much figured out with the trailers, that Earth was taking its revenge upon the human populace that had abused it for so long. Those same trailers also blared that this was Shyamalan’s FIRST R-RATED MOVIE OMIGOD I JUST DID EIGHT BACKFLIPS AND SLAPPED YOUR GRANDMOTHER IN THE FACE! IT’S AN R-RATED MOVIE…BY M. NIGHT SHAYAMLAN!!!!111 ZOMG HOORAAAAY!!!!!! Really; we’re supposed to get all excited because it’s a movie approved for everyone over the age of 17? If the movie’s rating is a big part of your advertising campaign, I’d say that’s a warning sign that all is not well.

Shyamalan’s always excelled as a director just as much because of what he DOESN’T show you, and it seems like the reason this movie is R-rated is because it features graphic scenes of violence that are completely unnecessary and even disrupt the flow of the movie. It’s a blatant disregard of the sensibility that’s made him such a successful filmmaker thus far.

Acting-wise, Mark Wahlberg sounds like he’s a whining kid on the verge of puberty for most of the movie, with dialogue to match. Standout moments were “Oh no!” and “Mrs. Jones?!” The script didn’t do him any favors; Shyamalan seems to have lost all sense of nuance and subtlety and feels the need to explain everything in the most uncomplicated, heavy-handed manner. You’d think you were watching a play written by a middle-schooler. Shayamalan is still a great director, but he needs to start shooting someone else’s scripts, I think. Take a break, M. Night; your creative batteries need recharging.

Zooey Deschanel is very attractive and kept this movie from being a D+. Though, the subplot about her and Marky Mark’s relationship on the rocks is tired and boring. I really don’t give a crap about it, and the actors didn’t appear to give one either, if their performances are any indication. 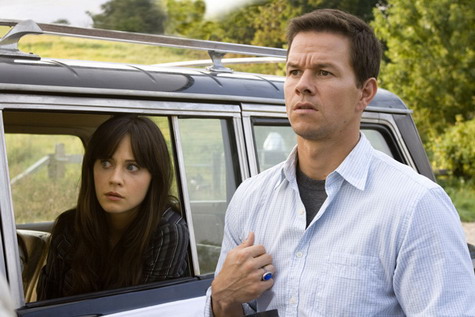 Ooooooo, the plants are attacking us!

I’m assuming you’ve already seen the movie if you’ve read this far, so let’s address some of the plot points. Well, actually, let’s just address the end. Millions of people have probably died, most of them by gruesome suicide; our heroes have spent 24 hours running for their lives, losing dear friends and seeing their fellow man shot, stabbed and beaten; thinking all is lost and they’re about to die because the human race took their planet for granted and are paying the price for it. Three months later: nevermind, all is well, let’s move back to a major metropolitan area. Ya know, one of the biggest sources of pollution and disease on the planet. I’m sure everything will be okay, right? The fact that nature got together and released a freaking neurotoxin that causes people to kill themselves in the most horrific ways possible was just a fluke, one-time occurrence, right? I’m sure we’ll all be fine!

So, right, our main characters learned absolutely nothing and chose to continue polluting the Earth. If nature can find a way to stop movies like this being made, I’m all for it releasing a deadly neurotoxin into the air.