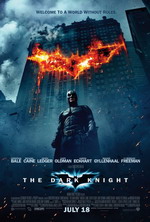 I can’t quite put my finger on it, but Dark Knight feels like such a wildly different movie from Begins. It’s almost as if it’s taking place in another world entirely. Every moment feels rife with tension in light of what’s at stake, something Begins didn’t seem to have. It was almost as if the first film took place in a world without too many real consequences; you figured the good guy would eventually win out because that’s the way these things work: the good guys win. Not so in TDK. Every action can and does have dire consequences; every character walks on a razor’s edge. It’s non-stop, intensifying tension that all stems from the Joker’s presence (even when he’s not onscreen). You’ll spend the flick with white-knuckled hands gripping your seat, and be worn out by the time the credits roll. But it’s a euphoric sort of exhaustion when those credits finally do roll. You feel like you’ve truly been through something that has the power to affect you on a visceral level–and you somehow emerge the better for it, whether that means a greater appreciation for the power of film or for just having had a great time at the movies.

Before the spoilers, a final note, and this is not optional: if you have an IMAX theater within driving distance, you must see The Dark Knight there. Director Christopher Nolan went so far as to shoot selected scenes of the movie (quite a few of them, actually) with an IMAX camera, meaning the image takes up the entirety of an IMAX screen, rather than just a centered 16×9 image with black bars on top and bottom. This is a visual and aural tour de force that deserves to be seen on the best screen possible. On with the spoilers…

One of the most amazing things about Batman Begins to me was the lack of Batman himself for an extremely large portion of the film. The first act is Bruce Wayne in exile, learning to shape himself into a weapon and eventually a symbol that Gotham can rally behind. The choice Nolan and screenwriter David Goyer made in creating a foundation for the character before he ever put the suit on cemented the audience’s relationship with Wayne first, and Batman second. The audience then feels invested in Wayne’s ultimate aim of inspiring the denizens of Gotham to something greater. I’ve digressed a bit, but that same sort of convention-twisting is present in Dark Knight as well, in that Batman almost feels like a secondary character most of the time, because Heath Ledger’s performance as the Joker is so enthralling and powerful. Ledger, without question, is the centerpiece of this movie, delivering a performance I have to think is worthy of an Oscar next February, especially in light of his untimely death earlier this year. His presence is felt in every scene, whether onscreen or not, and that contributes largely to that film-long maintenance of tension I mentioned earlier.

The rest of the acting is great across the board, particularly a welcome Maggie Gyllenhaal in the recast role of Bruce Wayne’s true love Rachel Dawes (Tom Cruise and the great and all-powerful Xenu undoubtedly forbade Katie Holmes from coming back as the character she played in Begins; instead forcing her to bow for hours at a time before a gold-plated statue of Cruise doing push-ups). Gyllenhaal’s performance feels more “adult” somehow, appropriate for a movie that has little in the way of kid-friendly happy time.

Michael Caine, Morgan Freeman and Gary Oldman are as reliable as it gets in movies these days. If you start your movie with nothing but them, you’re off to a great start. I thought Oldman was especially good; his growing sense of desperation as the last honest man in Gotham, in the face of Joker’s escalating brutality, is palpable.

Aaron Eckhart delivers a strong, if very slightly uneven, performance as the ill-fated district attorney. Unfortunately, I’ll always have the image and sound of him yelling “SERRRRRRGE!!!!” toward the end of The Core, but he almost made me forget it here. My favorite scene of his, funnily enough, was one without dialouge–and this probably speaks to the director just as much as it does to Eckhart–where Dent sees his lucky coin on the bedside table, and knowing Rachel is dead. The raw rage, sadness and horror he shows in that moment are as viscerally affecting as any I’ve seen in a while.

And thank God for directors like Christopher Nolan. He makes a year’s worth of crappy remakes and tired romantic comedies bearable–maybe even a few year’s worth of that tripe are bearable if Nolan can put out such quality as this every so often. There are too many superlatives one could use to describe his work on the Batflicks and just about everything else he’s done, so I’ll simply say he’s probably the best at what he does in the world of film today, and if there were only one reason these films have succeeded, it’s him. His respect and care for the source material is plainly evident, and he manages to inject enough of his own sensibility into the script that it’s almost a disservice to call it by that dreaded label of “comic book movie.”

The music for the two Batman films may be my all-time favorite soundtracks. It manages to be iconic without having the sort of memorable theme superhero movies have become synonymous with (look no farther than 1989’s Batman for evidence of that). It certainly has its recognizable motifs and movements, though, the two-note “rise and fall” section of bombastic French horns most notably. I get goosebumps every time I hear it. This time around, we have a new theme for the Joker, and it’s one freaking note of delicious, anarchical joy. One extended, distorted note. That’s it. I haven’t been a big fan of Hans Zimmer’s work in recent years, but his work on the Joker-related material for this flick is outstanding (co-collaborator James Newton Howard handled much of the Two-Face-themed music). I’ll have this playing in the car for the rest of the summer, so forgive me if I start thinking I’m driving the Batmobile and try to run you off the road or fire a missile at you.

I haven’t talked much about the plot, but I think you can all cover that yourselves. Thematically, the parallels between The Dark Knight’s story and what’s going on in our world today became much clearer to me after a second viewing (which I think may be required to fully digest the film in its’ entirety). How does one “fight” terror? How does one fight such an ethereal concept? That concept is certainly rendered in a tangible form of the Joker in the movie, but as he makes plain, he doesn’t have a set of rules he has to play by, you can’t hurt him by coming at him with the full force of whatever arsenal you command. The war on terror in our time is one that will be long, bloody and, quite possibly, fruitless. It’s a war of attrition and hearts-and-minds; a battle for the soul of the world. I hate to be so pretentious with that sort of phrasing, but there’s a lot of stake in the war raging in the Middle East right now, and the microcosm of that conflict is plain to see in Dark Knight.

Some random bullet points of other things I loved:

I know this review’s been a little schizophrenic (I’m taking a page from the Joker and introducing a little anarchy) and favoring gushing praise over thoughtful critique, but I’m just so energized and excited after an experience like this that I can’t help but spew out my thoughts in a rapid, stream-of-consciousness torrent of words. I hope you enjoyed yourself at The Dark Knight enough to want to do the same. Mr. Nolan, I eagerly await your third entry into the franchise in a few years, but this one will keep me busy for some time to come.