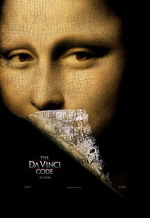 The much-anticipated big screen version of the best-selling book has finally arrived, and regardless of its quality, is sure to do big box office because of the book’s success. But taking all that out of the equation, does the movie live up to the hype of its text source? Yes and no. The combination of historical accounting and stretching the truth that made the book’s plot so provocative is still here, but there doesn’t seem to be any passion or excitement in the film’s narrative. It’s simply a series of drawn-out scene after drawn-out scene. The movie never really gets going, choosing instead to slowly build up steam but never “letting loose.” The result is more boring than thought-provoking.

I think a large part of the problem lies with the the casting of the protagonist, Robert Langdon. Tom Hanks never seems comfortable as Langdon, reciting his lines as if he were doing voiceover work for a history book instead of being a passionate symbologist genuinely excited by the mysteries he was uncovering. I think going younger with the casting would have aided the film in perhaps providing a bit more spirit and vigor to the role and, thus, the plot. The albino monk, Silas, is portrayed fantastically by Paul Bettany, who gives a–dare I say it?–deft and nuanced performance. The rest of the cast is pretty much uniformly good, though Ian McKellan’s portrayal of an aging Grail hunter felt a bit cliched and affected at times.

The other facet that contributes to the lack of exciting pacing is the editing, particularly early on. The opening scene with the curator of Paris’ Louvre Museum running from an unseen assailant offered a great chance to set a specific, foreboding atmosphere to the film, and ratchet up the tension from there. Instead, the scene is intercut with Langdon giving a speech and an Opus Dei priest talking to a reporter. While there is certainly a lot of exposition to get through early on, I think the film would’ve been better served by trimming a lot of that and sticking with the stuff in the Louvre. The movie never really hits its stride because of the early missteps.

Everything certainly looks good, and director Ron Howard seems to know what he’s doing when in the director’s chair, and uses the exquisite backdrop of Paris to great effect. When all is said and done, I think you can view the film version of The da Vinci Code as somewhat of a letdown–but I’m not sure it’s possible to live up to the book’s storied success to this point. Definitely worth seeing to, if nothing else, infuriate all these people protesting the story’s implications. When you boil it down, isn’t the main implication of the story that women have been treated unjustly by the Church, and that true equality is something worth striving for? Why would they be protesting that? Ooooooh, I know–it’s because THEY’RE INSANE.