To literally add insult to injury, the Bills lost in agonizing fashion, losing on a last-second field goal by Broncos K Jason Elam. This is the type of loss that has become all too familiar over the past five seasons or so, the team showing some promise before crapping the proverbial bed. QB J.P. Losman did next to nothing and I actually heard some idiot start chanting for Edwards to get on the field because of it. Now, that hyper-reactionary guy may be an ass, but there’ll be others that join that chorus if J.P. can’t elevate his game and produce more than the paltry 97 passing yards he managed on Sunday.

The often-bewildering play-calling didn’t do him any favors, with short slants and laterals being the favored plays to call. One of the few strengths of this Bills team is their potential for explosive plays on offense. Wide receivers Lee Evans and Roscoe Parrish both have the speed to burn corners down the field, and downfield patterns should be a regular part of the play-calling. Alas, I only noticed two or three plays in which a receiver was even sent down the field! Most of the time, their patterns all stayed within 10-15 yards of the line of scrimmage. The one time they did take a bold shot downfield was at perhaps the worst time: 3rd and 5 at the end of the game, when they should’ve been doing everything they could to run out the clock and hold onto a 1-point victory. This becomes especially glaring when you consider the game was lost on a literal last-second field goal.

Despite the aforementioned agony, there were some bright spots: the defense and running back Marshawn Lynch. The Bills 1st-round draft pick was stellar when he got a chance to run the ball, the highlight being a rumbling 23-yard touchdown run in which Lynch seemed to drag about half the Broncos defense with him into the end zone. I’m expecting good things out of the rookie, and it’s gratifying to see him do well in the wake of the less than amicable breakup between the Bills and former RB Willis McGahee. 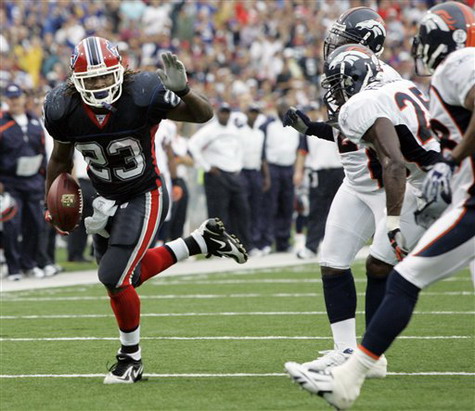 The defense, thought to be the team’s biggest deficiency, appeared surprisingly competent, holding the Broncos to 6 points in the first half and coming up with a number of crucial stops early on. Unfortunately, due to the offense’s ineptness, the young unit was on the field for far too long, and couldn’t stop the Broncos during crunch-time at the end of the game. I hate to look to the future only one game into the 2007 season, but I think this unit could have a great future with a couple of key additions in the upcoming offseason. The injuries they suffered today will be a lot to overcome in 2007:

The special teams, as they have been the last several seasons, are again the Bills’ best unit. Pro Bowl punter Brian Moorman was his old reliable self, the coverage unit didn’t give up any big returns, and Roscoe Parrish took a punt return to the house early in the 1st quarter to send the 73,000+ fans in attendance into a euphoric frenzy. God bless Bills’ special teams.

I finally got a look at the much-ballyhooed new jumbotron at the Ralph, a massive HD screen that lords over the western end of the stadium. It wasn’t nearly as obtrusive or distracting as I was expecting. I was able to watch the game action itself without having to see the giant TV in my periphery, turning to it only to see replays. I’d like to watch TV on that sucker on non-gamedays. 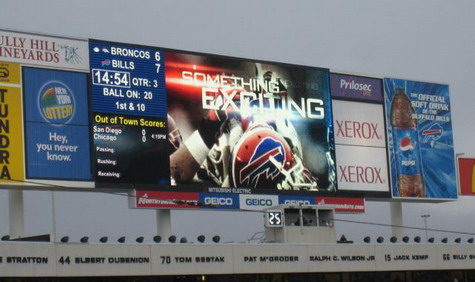 Old Stevie Tasker also got his name on the Bills’ Wall of Fame during halftime. The special teams ace was one of the more memorable members of the early-90’s glory days. I’m hoping a spot in the Hall of Fame will be next on his list of achievements. 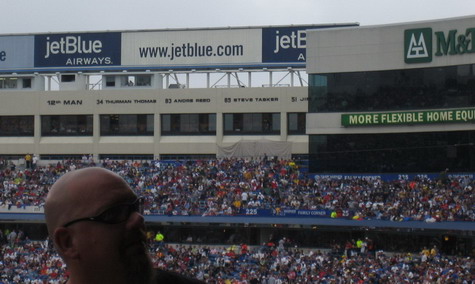 So, an inauspicious start to the 2007 season, but I’m not quite at the point of “there’s always next year” yet. The Bills have the toughest schedule in the league this year, and I’m hoping they can stand up to the task and give the city something special. Time will tell, but the team can’t foresake opportunities like today. When they’re up by 1 and have the ball with 3 minutes to go, they MUST seal the deal. It could be a long season, but…GO BILLS!