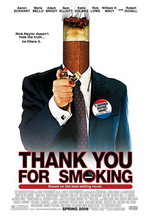 A brilliant satire of the tobacco industry and its Washington lobbyists that loses steam in its last third. Thank You For Smoking follows big tobacco’s best and brightest lobbyist, Nick Naylor (Eckhart), as he goes about his duties sweet-talking the American public and their governmental representation into believing cigarettes aren’t so bad after all.

Of course, along the way, Naylor has a semi-crisis-of-conscience about what he’s doing and repents (sort of). Eckhart is great as Naylor, the smooth-talking lobbyist who can successfully argue for anything, whether it be convincing a kid dying of lung cancer that cigarettes are okay, or the Marlboro Man to shut up and take money instead of going public with his cancer diagnosis. Naylor always has the twinkle in his eye and disarming smile on his face that puts his target at ease.

Very good direction from a director I’ve never heard of, Jason Reitman, and a flick in a genre we don’t nearly see enough of. A good satire movie can be much more persuasive and informative than many documentaries produced these days. In the case of Thank You For Smoking, it’s a bit scary that you’re almost persuaded by Naylor’s early arguments for cigarettes, which makes the realization that they’re a deadly industry that’s killed millions that much more impacting. The movie is hilarious throughout, nowhere more than with a Hollywood superagent (Rob Lowe) wearing a kimono in his office in the middle of the night (see for yourself). Unfortunately, the movie gets into cliche-mode near the end, with Naylor coming to realizations about the work it does and the impact it has on his young son. It’s a bit too sentimental after all the biting sarcasm and wit thrown the viewer’s way in the first two-thirds of the movie. That being said, this is a movie well worth seeing, both on an entertainment level and on the “edumacate yourself” level.