J.J. Abrams had a challenge on his hands in tackling a once-proud franchise that grew stale in the last decade while other new franchises were born and made the previous Trek films seem a bit wanting in comparison. While his Star Trek essentially does reboot the franchise, it does so within the established context and canon of previous films; it exists in the same universe and timeline, through Old Spock and Nero certainly make a mess of the latter.

What helps is Abrams’ slick direction; modern film style at its best — it skirts the right side of the line separating engaging camera work from psychotic, kinetic music video nonsense. I’ve never seen Star Trek shot like this before; it’s not a wide shot of the ship moving slowly across the starfield. You actually feel like you’re watching an actual spaceship engaged in maneuvers and battle. The ship’s got real “weight” to it, if that makes any sense.

The tightly-knit plot moves along quickly but intelligibly. But, I couldn’t help feeling they should’ve slowed things down just a tad–there are times when things felt like they fell into place a little too easily and there’s a three-year period that might’ve borne some decent scenes instead of a “THREE YEARS LATER” card. But the story’s moving so fast, you don’t have time to stop and nitpick. This bears detailed analysis in subsequent viewings, of which there will be several. In particular, I need to analyze the hot, green alien girl in far greater detail. 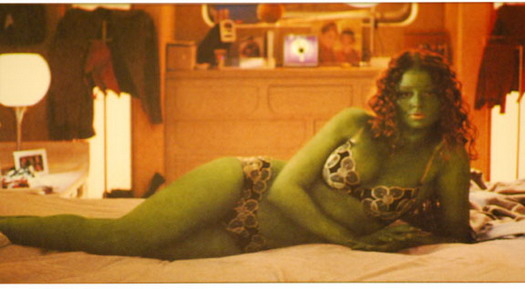 The casting, all-important in a franchise film like this, is spot-on across the board. All the actors manage to evoke the original characters without becoming caricatures — these guys all serve a purpose other than to provide imitations of old Trek actors. I would have liked to have seen George Takei back as Sulu, however. Yes, as his younger self. It’d be hilarious. 60-year old Takei playing a 17-year old. Don’t tell me you wouldn’t find that hilarious. 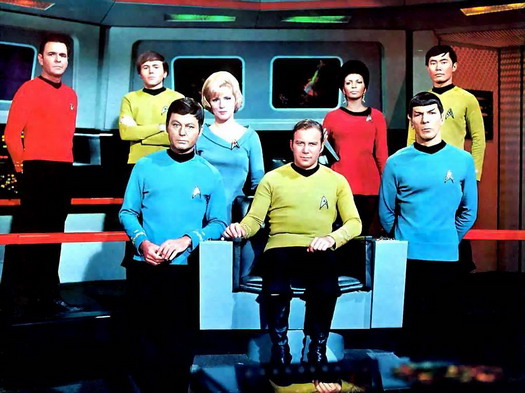 Michael Giacchino’s score is bombastic and wonderful; and while at first I found it odd that he didn’t use the old, familiar Trek themes, it makes sense that he wouldn’t. As Spock outlines so nicely in the film, Nero’s coming back in time has set the character’s destinies on altogether unknowable courses–things won’t necessarily play out like they originally did. The all-new theme is a musical reflection of that concept, in my eyes.

Industrial Light & Magic’s visual effects are outstanding across the board; so much so that I wonder if they spent some extra dough between December (the film’s original release date) and now. Outstanding work that would and should win an Oscar in most years (Transformers 2 may have something to say about that, though the work there’s also by ILM).

Problems? Not many, though I thought Nimoy’s performance had a little too much of a, “I’m as giddy as a schoolgirl to be working on a badass new Trek film without that insufferable egomaniac Bill Shatner” quality to his dialogue delivery. I think the dialogue in other spots might’ve been spotty as well, but the characters were all played so well that the nostalgia of seeing the old familiar behaviors can blind you to it. And the film’s villain, Nero, is woefully underdeveloped. We get about two minutes of explanation of his motivations throughout the movie (you’ll have to read a comic book prequel to find out more about it, which frankly is kind of lame).

I can’t wait to see what comes next; Abrams has reinvigorated a once-moribund franchise with new life and new possibilities. Judging by the applause at the end of the two screenings I’ve been at thus far, I’m not alone in my eager anticipation of the next installment. I’m getting closer to forgiving Abrams for allowing ABC’s Alias to deteriorate into crapfest episodes featuring a remote control assassin helicopter. Hell, I’ll sign up for whatever he chooses to direct next, too. I wonder what Abrams could do if he got his hands on Star Wars…