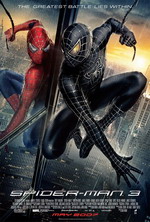 Whoops. Sony Pictures won’t have to worry about losing any money on the third film in the Spider-Man series, as it’s likely going to set all kinds of box office records this weekend. I’d like to say it’ll earn that money because it’s such a great movie, but alas–it’s a mess. As was the case with the much maligned Batman franchise (before its reinvention with Christopher Nolan’s magnificent Batman Begins), the third Spider-Man flick tries to do too much in an effort to pack as many action set pieces and villains as possible into its’ bloated 2.5 hour running time instead of focusing on the heart of any great movie: the script. Joel Schumacher almost destroyed the Batman franchise when he took over on Batman Forever and Batman & Robin, and while Sam Raimi hasn’t nearly destroyed Spider-Man, he hasn’t left us going in the right direction.

I’m still giving the film a B-, because it’s got enough great moments to keep it entertaining throughout, but after the near-perfection of Spider-Man 2, 3 is something of a sobering letdown. The big problem is that those great moments aren’t backed up by any semblance of coherent narrative flow–it feels like the scriptwriter made a laundry list of stuff he wanted to see in the movie, and just wrote a few flimsy, tedious segues to link those events together. Instead of coming up with a solid foundation of story, the focus was instead on inundating the audience with as many iconic battles and images as possible. I identify with where they’re coming from–this could be the last Spider flick for a while, and you definitely want to satisfy fans with giving them as many homages to the original comic book as possible, but the risk you run in taking that approach is making a movie that has no direction or focus–and I’ve never seen a good movie that lacked direction. Spider-Man 3 is just sloppily scripted all around.

A few of the film’s problems could likely have been solved in the editing room, as there’s about 20 minutes that could’ve easily been cut from the film, mostly involving the tedium of the strained relationship between Peter Parker and his girl Mary Jane. There are a few random, good moments in there, but it feels like everyone in the film is just killing time until the next big action set piece. There are so many shifts in tone and pacing that you never really feel like you’re along for the ride as an audience member. It’s more like, “Hey, look at this–the guy is made of SAND! No–wait, everyone chill out while Peter and MJ have dinner! Okay, now look–an explosion! Okay, now look at Peter having a heart-to-heart with his Aunt May while they drink tea!” I felt like I was never given a chance to catch up with where the film is going because it changes focus in a completely random manner.

Those action set pieces, while nice to look at, don’t offer the same opportunity for emotional investment the previous films had. I didn’t really care about the motivations of our villains, because they’re never adequately fleshed out. I won’t go into detail to keep from spoiling anything, but the sequence of events that leads to the creations of the film’s villains feel manufactured–some brief lip service is paid to the motivations of our villains Sandman (Hayden-Church) and Venom (Grace), but it’s just that–lip service. We don’t really care where they’re coming from or why they’re evil. They’re onscreen to look good and fight our hero during the big special effects sequences. 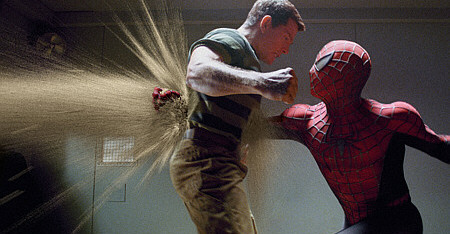 I was really hoping to see a great movie that lived up to the hype and promise of the second film, but instead saw a crew trying too hard to jam as many things into the movie as they could on their way out–a last hurrah to close the franchise out with (if indeed this is the final chapter in the franchise). Watching the jumbled mess of scenes mashed together is an exercise in frustration for the audience–or at least for me. I’ve been overly negative for most of the review, but still need to justify my giving it a B-.

The action sequences and effects are fantastic, it’s the stuff comic book writers like Stan Lee could’ve only dreamed about when they began writing the books so long ago. To see Spider-Man slinging his way through the skyscrapers of New York and battling supervillains in death-defying manner is what makes the age of computer-generated effects so damn cool. With the technology, you can literally do anything. If your mind (and minds like Stan Lee’s) can imagine it–Hollywood can do it. Sandman and Venom were both presented with an eye to a faithful depiction of the comic book source material.

Venom, in particular, is gonna make most geeky fanboys excited. He’s long been the webslinger’s most popular enemy, and to see him onscreen in all his sadistic glory gives me the warm and fuzzies. If only the rest of the flick inspired such feelings. There’s also a few scenes involving Peter Parker and his newfound confidence (and dance moves) which are hilarious–I won’t spoil it, but he becomes quite the ladies man for a 10-minute stretch of the flick. And as with the previous two films, every scene with Daily Bugle editor J. Jonah Jameson is a de-light! (Say “de-light!” with Will Ferrell’s Robert Goulet voice if you’re looking for a good time.) 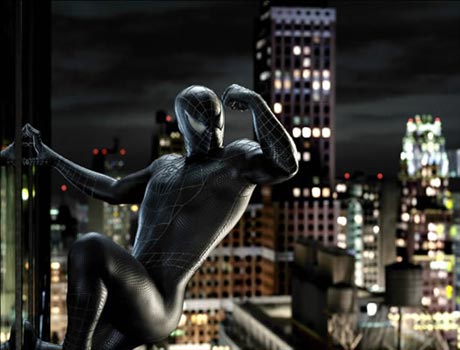 A final note on the IMAX version of the film. While the sound was great as expected, I didn’t think the visuals held up as well as they probably will on the regular-sized screens. It’s the first movie I’ve seen on IMAX that hasn’t blown me away. So, make use of that info however you wish.