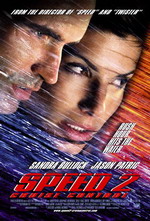 Despite the cruise ship being about a hundred yards away, it takes about 20 minutes for it to reach the tanker. This sequence is essentially repeated with a seaside commerce area a few minutes later. All in all, shots of “boat going fast” take up about 78% of the movie.

I haven’t said much about the acting thus far because, well, there’s not much to say about the acting. Despite all this, it’s worth seeing solely for Willem Dafoe’s fantastic, maniacal laughter at the end. Sandra Bullock’s easy on the eyes, too. Oh, and font like this indicates the movie will be fraught with fast-paced, exciting action!!!! RUSH HOUR HITS THE WATER!!!