“My long association with the Buffalo Sabres was nothing but positive and I was fortunate to retire from the game as a player but be able to stay involved as a broadcaster,” said Jim Lorentz. “I was blessed to work with two of the best play-by-play men of all-time in Ted Darling and Rick Jeanneret. This was a tough decision to make, but after 43 years of travel as a player and broadcaster, I based my decision on the unwillingness to tackle another long season and grueling travel schedule.”

During the final three preseason games, the team will use three different former Sabres players as the color commentator during the radio broadcasts — Matthew Barnaby (Wednesday vs. Toronto), John Tucker (Friday at Pittsburgh) and Mike Robitaille (Saturday vs. Pittsburgh).

Lorentz began his broadcasting career in 1981, as the color commentator for radio and moved into the TV booth in the role of television commentator prior to the 1992-93 season. Lorentz played 10 seasons in the NHL with Boston, St. Louis, the New York Rangers and Buffalo. His 331 points rank him 14th in all-time scoring for the Sabres, recording 134 goals and 197 assists in 487 games. He retired in 1978 with 399 points in the NHL and was a member of Boston’s 1970 Stanley Cup Championship team.

As much attention and credit as play-by-play man Rick Jeanneret gets for being one of the defining symbols of the franchise, Jim Lorentz was no less important. They were a perfect pair, and Jim’s understated but intelligent commentary was always a welcome contrast to the high-flying Jeanneret. He was a homer by every stretch of the imagination, but he was among the fairest local broadcasters I’ve ever heard. Do yourself a favor (or not) and try and catch the radio broadcast of the Tampa Bay Lightning’s Stanley Cup victory from a few years ago. The ranting homerism in the call of the local Tampa Bay broadcasters is characteristic of everything that’s wrong with local broadcasting, while Rick and Jim are a symbol of everything that’s right. Class, dignity and a respect for the tradition of the game.

Jim Lorentz, like Briere, Drury, McKee, and Grier before him in the recent past, will be sorely missed. The broadcasts of the games this season will sound very, very strange without Jim by Rick’s side. Lorentz has been a familiar and welcome presence on the TV and radio since my earliest memories of being a Sabres fan and it just won’t be the same without him. Thanks for the memories, Jim. 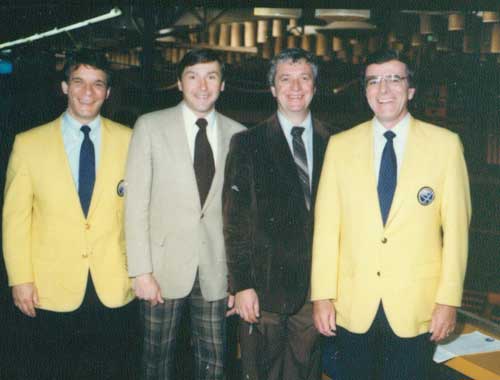