I take my mind off her and I crawl back inside myself. It’s almost killing time, and I better get sharp.

So sayeth the indestructible Marv (Mickey Rourke) in “The Hard Goodbye,” a vignette within one of the outstanding, one-of-its-kind movies of all-time, Sin City. They simply don’t make movies like this, and by “they,” I mean the Hollywood establishment. Rarely will you see a film this unique coming out of the studio system, and even rarer still, will it be so good. Director Robert Rodriguez shot the entire film on green screen sound stages, later replacing the green with the many seedy, dark backdrops of Basin City. All this to better embody famed comic writer/artist Frank Miller. Miller’s “Sin City” graphic novels have been acclaimed for some time, but translating them into a big screen flick never seemed to be feasible. The distinct look in the novels could never be captured by any other medium but an artist’s canvas. 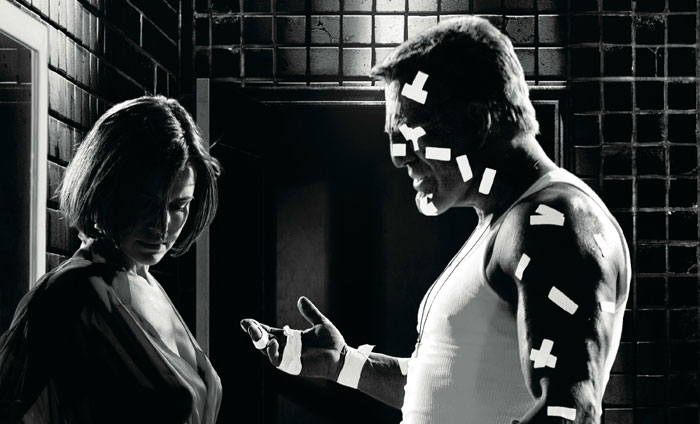 The flick goes through a series of stand-alone vignettes (though they’re all inextricably linked), following the lives of some of Basin City’s bravest, bloodiest, meanest, and toughest characters as they seek revenge, look for a good time, cruise the streets, and dispose of the bodies they leave in their wake. It’s a good old-fashioned, hard boiled thriller, and I do shame to it by attempting to put the experience of watching Sin City into words. From Goldie’s red lips to that Yellow Bastard’s bloated (and yellow) head to Basin City’s hard-edged, black & white hues, it’s something you should experience visually for yourself. So I’ll stop here and say you should do just that.