In “The Shape of Things to Come” two weeks ago, Ben’s confrontation with Charles Widmore hinted at the concept of a temporal chess game in which the two of them have specific parts to play while adhering to a certain set of rules or standards. Widmore “changed the rules” of the game by killing Ben’s adopted daughter, as if to say Charles didn’t follow the script laid out for the players. Knowing what we know from the many flashbacks, flash forwards and sheer coincidence that brought all the castaways together, can we infer everything that’s played out in four seasons of Lost was all preordained, to a certain degree? Are all of the characters locked into a destiny decided for them long before they ever took their first breath out of the womb? Tonight’s episode certainly wouldn’t dissuade one from thinking just that.

A jump in the way-back machine takes us to John Locke’s premature birth to an underage mother who miraculously survives getting hit by a car. Little John is stricken with all manner of ailment right off the bat, pneumonia and infections, etc. But he somehow survives; the doctor calls him a “fighter,” the youngest preemie who’s ever survived there. We’ve seen that stubborn, fighter mentality throughout Locke’s story; always retorting to his doubters with “don’t tell me what I can’t do.”

Is it that mentality that’s led him to the Island? Or are greater forces augmenting the fight in him–the forces that decide the destiny of the players in this particular game? Dr. Alpert’s appearance shortly after John’s birth would cause me to lean toward the latter. We all know the doc’s been around for a while; he looks the same now as he did at John’s birth and when he met a young Ben Linus in the jungle, so we won’t dwell on that for now. But, did he know when and where John would be born, and seek him out? Was John on one of Jacob’s many lists already (we know from Ben that he was on Jacob’s List after the 815 crash)? Or was Alpert’s appearance more a product of a broad search for “special” kids born in somewhat extraordinary circumstances? Can I compose a paragraph made up of nothing but rhetorical questions? 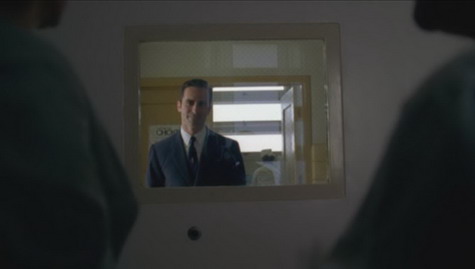 Alpert shows up again when Locke is about eight years old, offering the chance at a special summer camp for–here’s that word again–“special” kids, put on by Mittelos Labs (clearly another division of the corporation that houses Mittelos Bioscience, the group that hired Juliet in the flashbacks in episode 3×07). [MITTELOS = LOST TIME] He appears to test Locke by laying out a number of items and asking John which of them already “belong” to him. I’m guessing Alpert didn’t sneak into the house and nab some of Johnny’s possessions, so this was more of a personality/potential test to see where the kid’s interests lay. 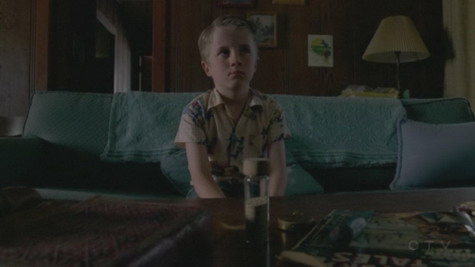 John examines the vial of sand-like material (which looks very much like the material that made up the border/boundary around Jacob’s cabin on the island), the compass and then, much to Alpert’s dismay, chooses the knife. Young John opts for the one item that could be used for less-than-enlightened purposes. Killing, hunting, etc. A tendency toward violence. At that point, Alpert decides he’s targeted the wrong kid and leaves. Does he leave to pursue the alternate for Locke’s spot at the “summer camp,” one Benjamin Linus?

Continuing the theme of destiny, Locke meets up with Matthew Abaddon while in rehab, the man who later claimed to be an Oceanic Airways lawyer to Hurley, and the man who contracted Naomi and the rest of the mercenaries on the freighter expedition. The purpose of the mysterious man’s visit seems to be forcing Locke to recognize he has a greater purpose to fulfill. More specifically, he recommends Locke go on a walkabout in the Australian outback. Was it to get John to discover something about himself? Or merely a way to get Locke onboard Flight 815 and to the island? Either way, Abaddon is playing a part in shaping Locke’s future. 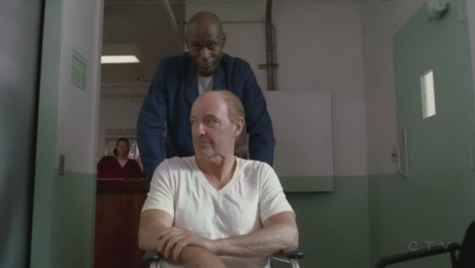 Where does this leave us going into the season finale, and for the next two seasons? Are the characters still locked into a path already set for them? Or is it really possible for them to force that train off the tracks and “change the rules,” as Widmore has done? Yeah, I’d say so.

Good God, if the length of this recap is any indication, the one for the show’s season finale is gonna take three days to write. I should guess at what’ll happen and start writing now. A scheduling reminder: part 1 of the 3-hour season finale airs next week, followed by a one-week break, with parts 2 and 3 airing back to back on May 29th. And then it’s an interminable seven months ’til season five.

9 thoughts on “Locked In”