Well, I was hoping to be writing this post after the Sabres had set the NHL mark for most consecutive victories to begin a season but alas, it was not meant to be last night in HSBC Arena as Buffalo fell to the Atlanta Thrashers 5-4 in a shootout. The result didn’t end up putting a damper on the night altogether, as the fans rose as one to give the team a standing ovation until the Sabres responded by gathering at center ice and raising their sticks in salute to the raucous fans that live and die with their sports teams. It was a great moment to witness in person, regardless of the game’s outcome (though, if they’d lost 8-2, it might not have been so great).

Goalie Ryan Miller wasn’t his old, spectacular self, letting in a couple of questionable goals he should’ve had. The five guys playing in front of him didn’t do him any favors, however. Three of the four goals Atlanta scored in regulation came as a result of careless giveaways by the Sabres in the offensive zone, and not because of any pressure the Thrashers were applying. Max Afinogenov tried to pull off a nifty but wholly unnecessary no-look, between-the-legs back-pass just across the blue line. Unfortunately, there wasn’t a Sabre within 8 feet of the puck and he served it up to a streaking Bobby Holik, who found the back of the net. Couple that with the Sabres’ inability to win key face-offs and they were playing from behind all night.

The other goals came courtesy of similar circumstances; it looked the Sabres were a little too confident in their ability to make the highlight-reel-worthy passes and rushes that’ve come so easy in these first ten games. They just gave the opposition too many chances by doing so, which is ironic, considering the Sabres are typically so adept at taking advantage of even the slightest mistakes. Atlanta, which is arguably among the top two or three teams in the league, gobbled up the loose pucks and made Buffalo pay for their carelessness. In the process, they nearly succeeded in taking the fans completely out of it, the Thrashers answering back seemingly within seconds each time Buffalo tied it up. 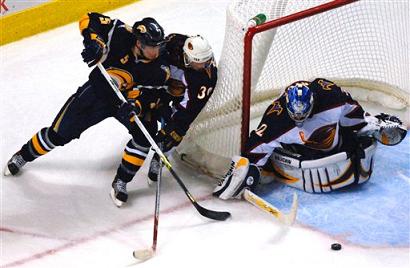 Despite all that, the Sabres repeatedly came back from one-goal deficits to force the game to overtime on a Jochen Hecht goal that sent the crowd into absolute delirium. They remained on their feet for the remainder of the game, trying to will the Sabres to that record-setting victory. The shootout made it clear that number 11 wasn’t to be. Afinogenov, Briere and Vanek couldn’t put the puck past Atlanta goalie Kari Lehtonen, sending shots wide or off the crossbar, in Vanek’s case. The Thrashers, with some of the best snipers in the NHL (including all-star Ilya Kovalchuk) figured to have a distinct advantage going into the shootout, but it was forward Vyacaslav Kozlov, a former Sabre (for all of five minutes) who won it, slapping the puck over Ryan Miller’s outstretched foot for the only goal Atlanta would need in the shootout. Fitting that it would be Kozlov who won it, he who badmouthed the team and coach Lindy Ruff on his way out of town a few seasons back. 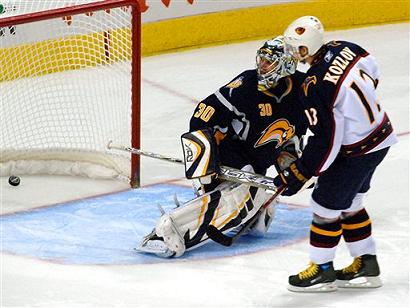 There was some more bad news after the game, as we found out Sabres blue-liner Henrik Tallinder will be out 4-8 weeks with the same broken left wrist that sidelined him in last year’s playoffs. Buffalo will miss him greatly, as he’s been the team’s most consistent defender dating back to early last season. Reserve defenseman Nathan Paetsch will have to step up and eat up some minutes for the defense corps; here’s hoping the experience he gained at the end of last season will prove valuable this year.

All in all, it’s still real early in the season, and despite last night’s loss, there is no reason for anything but optimism for the team’s ultimate fate this year. Anything less than a Stanley Cup will be bitterly disappointing, but for the moment, I think all of the Buffalo fans in the world are enjoying one hell of a ride through the 2006-07 NHL season.