Here we go again. The discovery of another hatch. Howeva, we get right down this new hatch within minutes of its discovery. What a concept!

Tonight’s episode focused on the cryptic “?” diagrammed in the middle of the door mural down in the hatch; the hub to each of the other stations on the island. But before I get to that, let’s address the fact that Eko (and Locke, partly) were led there by dreams/visions. They’re not the first to be influenced by visions on the island. Jack’s father led him to the caves and water; Kate (and Sawyer) saw her “guardian angel/horse;” Shannon saw Walt; Locke saw Boone dead; Charlie saw a religious painting inhabited by fellow castaways; etc. Eko’s dream about Ana Lucia seemed to coincide with her passing, so are we to conclude that it’s Ana Lucia’s spiritual self that’s worked its way into Eko’s consciousness–or is this the island at work? The flashes of the past Eko sees in his dream fall into the rhythm of the sounds of the hatch counter resetting, and show scenes from his prior flashbacks and experiences on the island. 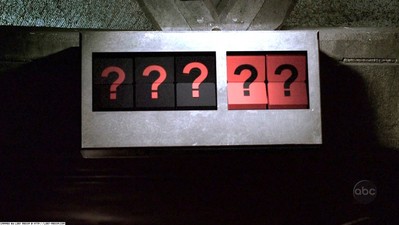 My immediate inclination, beyond any spirtual implication, is that Eko’s having been “scanned” by the security system (“Cerberus”) a few episodes back was part of a data-mining process on the part of the island to file away for use down the road. That time came when the island deemed it necessary to propel both Eko and Locke into action. Or, more specifically, when it came time to force Locke to renew his faith in the purpose of “pushing the button.” If this is the island at work, is its “purpose” in danger if that button is not pressed? What exactly does the island want here? Or, perhaps it’s not the aims of the island but those of Alvar Hanso and the Dharma Initiative that are in danger if the work in the hatch is not continued. 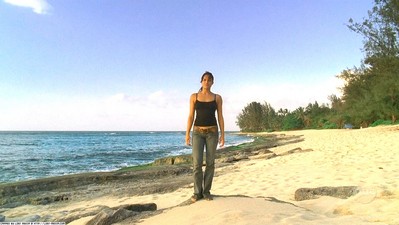 With new purpose, Eko confronts Locke about the question mark. Eko and Locke both eventually see Eko’s younger brother in a vision, the priest that was taken aboard the plane in the last Eko-centric episode some months ago. Working together, Locke and Eko make it back to the site of the plane crash (and Boone’s accident) and with the help of Locke’s vision, Eko makes a climb up the cliffside and sees the sought-after question mark. 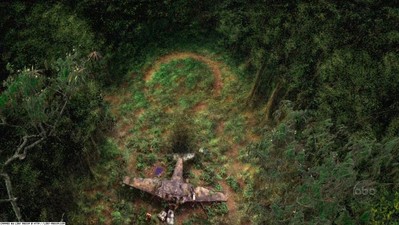 And wasting no time, they find that the dot at the bottom of said question mark is another freaking hatch! But instead of making us wait an entire summer to find out what’s inside, they head right down and discover another Dharma station, this one dubbed “The Pearl.” Before I get to that mindjob though, I want to address the fact that Locke and Eko are working together, something that was foreshadowed back in episode 10, during Eko’s conversation with Locke about the Bible down in the hatch, and the Gilgamesh/Enkidu references in the crossword puzzle Locke worked on.

After the abandonment of his animal brethren, Enkidu is introduced to a pastoralist way of life. He works for the trapper and shepherds, hunting and killing the animals he once served. Soon he grows restless, looking for a greater challenge.

Shamhat tells of a great king in the city Uruk (Gilgamesh) and says, too, that he would be a worthy challenge for Enkidu. Gilgamesh is surprised by Enkidu. The two wrestle fiercely for sometime, until suddenly Gilgamesh gains the upper hand and throws Enkidu to the ground. Knowing his defeat, Enkidu praises Gilgamesh and both swear an oath of friendship. For the remainder of the epic they cohabit, as lovers according to some interpretations.

Eko would seem to be the Enkidu of the relationship, now working together with Locke’s Gilgamesh. But I digress. On to Pearl Station. 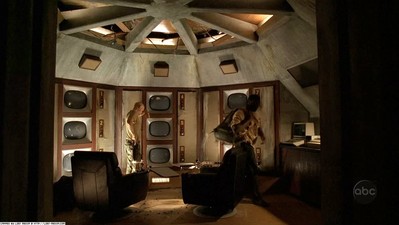 We get a small, basic room that appears to be set up for couch potatoes who like to write, but the actual purpose of the room isn’t immediately clear. Leave it to Dharma to fix that. As with Swan Station, there’s a handy orientation video, featuring none other than the enigmatic Dr. Marvin Candle–wait, what’s that? He calls himself “Mark Wickman?” Interesting. I suppose the next video we see will feature “Frank Waxenstein.” The content of the video isn’t what really provokes thought so much as the fact that Candle/Wickman is using two different names in two different locations, and telling the viewer only what he or she “needs” to know. The obvious conclusion one can draw is that all of these stations are simply pyschological experiments to test the limits of human mental endurance. The task of Pearl Station’s residents is to simply view and record the actions of Swan Station’s residents, no matter “how seemingly unimportant.” They record these observations and send them off in a pneumatic tube, presumably to Dr. Candle/Wickman or maybe even the deGroots themselves. I’m guessing it won’t be long before Locke and/or Jack try to discover just where that tube goes. After three weeks of 8-hour shifts, the Pearl’s crew is instructed to leave and board the “Pala Ferry” (sp?) to return to the barracks, if I heard right. 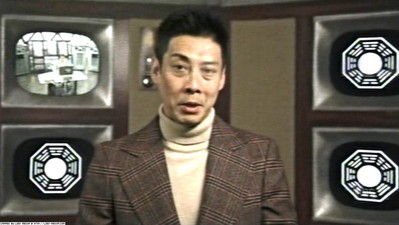 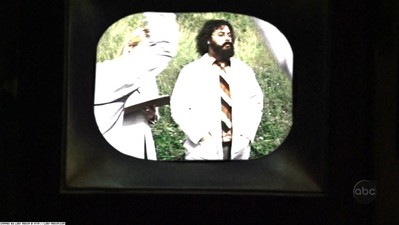 The only problem with following that tube is that it may not lead to anyone; it may just lead to another abandoned station. It looks as if Pearl Station has been unoccupied for quite some time, and the video itself was made in 1980. So we may end up finding more stations and more confusing orientation videos before too long. To sum up so far, now that we have Pearl Station (station 5 of 6, according to the video):

The only problem with this is that there appears to be a 7th station on the door mural. Perhaps that 7th station is what lies at the end of the pneumatic tube? Maybe the aforementioned barracks are actually that 7th station. And, if the dashed lines on two of the stations are any indication, maybe those barracks are underwater and the “ferry” is actually a submersible of some kind.

I haven’t addressed Eko’s flashbacks until now, but that does not make them any less important. The overarching theme of “?” seems to be confirming one’s faith; in fact, the monsignor Eko answered to spoke of these “confirmations of faith” in reference to his tasking Eko to determine the validity of a reported miracle in Australia. When Eko states that he doesn’t believe the claim, the monsignor replies with (paraphrasing here) “that’s exactly why I chose you.” If you can convince a skeptic, the claim will have all the validity it needs. All this notwithstanding, the real juicy stuff occurs when Eko finally makes it to the home of the miracle girl who came back from the dead, and–wouldn’t you know it?–she just so happens to be the daughter of the “psychic” who sent Claire on her way on Oceanic Flight 815. 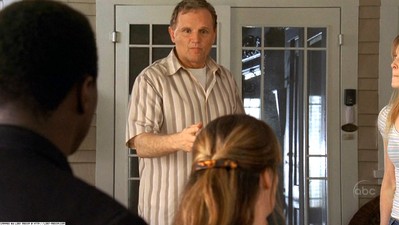 Even more interesting than the fact that the man’s daughter came back from the dead is that the psychic views himself as a fraud with no actual psychic ability. He attributes his skills to careful research and exploitation. It’s difficult to say if he really meant that, as he seemed pretty convinced and frightened of his own abilities when he meets Claire later on. Also, I may be reaching on this in an effort to link current events to that picture of Desmond and girlfriend down in the hatch, but doesn’t the psychic’s daughter look a bit like the girlfriend? 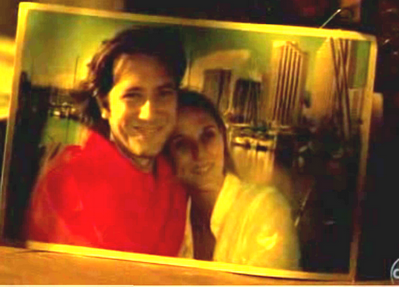 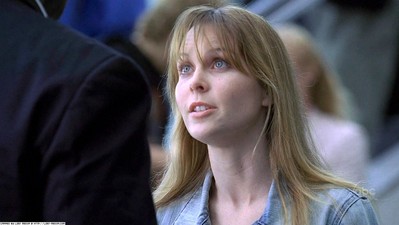 Again, I’m probably reaching, but I’m still digesting all this. Speaking of digesting things, I haven’t had much time to put into deciphering anything out of the “Lost Experience” online game currently underway that I spoke about last week. I may invest some more time into it after this season ends, but for now I leave the detective work to you.