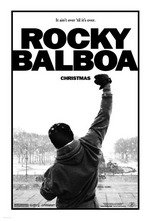 Rocky Balboa knows exactly what it is–it’s not trying to dress up Stallone as something he’s not–he’s a boxer hanging onto the faded glory of years past. The story hasn’t been Hollywood-ized into a cliched shadow of itself; Rocky isn’t presented as a larger-than-life superman who’s content with his place in the world. In fact, the world has mostly passed Rocky by. He’s recognized by everyone he meets in Philly, humors those who want their picture taken, and regales guest at his restaurant with stories from his memorable bouts. But he’s no longer the hero at the forefront of the city’s consciousness; his statue in front of City Hall has been taken down, his relationship with his son is strained, and he spends many of his days at the cemetery in front of his dead wife’s grave. Life has passed Rocky by, and he seems to be struggling to accept that fact.

This is where a chance to box again stirs something inside him, “The Beast,” as he refers to it, and he sees an opportunity to regain a little bit of the past glory that built that statue in front of City Hall in the first place. As all fighters think they do, he’s got “one good fight” left in him, and he wants to prove to his son, to Philadelphia, to Adrian, and most importantly to himself, that he can still get it done in the ring. 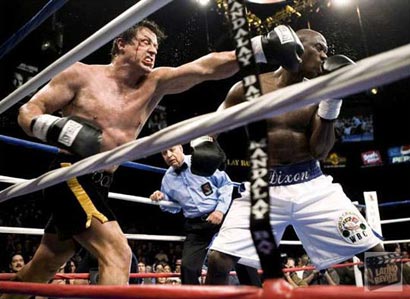 Real-life boxer Antonio Tarver doesn’t present the larger-than-life “villain” of Rockys past, but that’s not the point. The movie isn’t about Rocky face-off opponent, it’s about him coming to terms with the things he’s done in his life and moving forward. In exploring that, the fight at the film’s conclusion becomes almost secondary. It’s just the capper to the long journey Balboa started and ends in the low rent districts of South Philly.

Stallone does a solid job of building toward that climactic fight, quickening the pace as fight night gets closer and closer. But it loses a bit of momentum during the fight itself, of all places. There are myriad shots inter cut with the fight of memories from his past–of Mickey, of Paulie, of Adrian, of fights. While it’s an appropriate technique to use in what will be Rocky’s and the franchise’s last fight, it’s not executed that well. The inter cutting gets distracting and hard to follow, and I would’ve rather had Stallone focus on the fight itself instead of getting slogged down in a rapid series of one-second flashbacks.

The audience is so endeared to Rocky by this point, however, that the low points are easy to overlook. I think I again attribute this to the nostalgia factor. I never had the opportunity to see a Rocky flick on the big screen, and it’s amazing how much of an impact the character can have in the theater. It takes a helluva lot to give me goosebumps during a movie. Balboa did it on more than one occasion. As for Stallone himself, it’s impossible to make the distinction between the actor and the character. Sly lives and breathes Rocky, and you can feel the passion he has for the character in every scene, in every line of dialogue. He’s never been properly recognized as a great screenwriter, but I think you have to give him a lot of credit when looking at his body of work. Shakespeare he’s not, but he’s got a knack for telling stories that connect with the audience. He’s had his misses, he’ll be the first to admit it, but he’s done enough for me to be one of the “good guys” in Hollywood. Rocky will be remembered as one of the good guys of film, ending the franchise on a high note and delivering the audience a real gift this Christmas. I hope you enjoy it as much as I did. 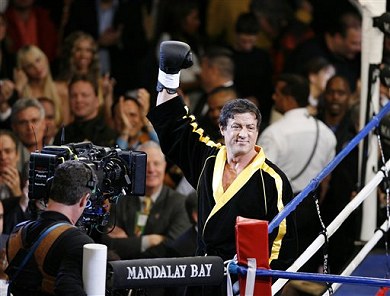 Stallone recently did a two-week Q&A, answering ten questions every day, on movie site Ain’t It Cool News, which I highly recommend checking out before you see the movie. I don’t know of too many stars who’d do this kinda thing. It’s a refreshing and candid look into the actor and his work. Check it out.