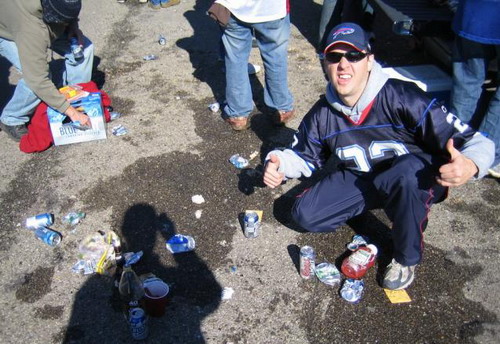 With that out of the way, I’ll say I’m really impressed with this Bills team. After the debacle in the Arizona desert two weeks ago, QB Trent Edwards returned from a concussion to lead the Bills to a convincing 23-14 victory. It’s amazing how much different the team looks and plays when he’s active, on the field or off. They played inspired football today, cutting the power on a vaunted Charger offense that led the league in points scored. And I’m only too pleased that two turnovers by Philip “D-bag” Rivers sealed the deal in the 4th quarter.

What I need to see from the Bills going forward is a win on the road against a quality opponent, and a better running game. Those are the last pieces of the puzzle to get me convinced that this team is a contender for not just the playoffs, but an extended postseason run.

A word on the power outages at the stadium, since you may not have been there for the fun. The power apparently went out around 12:30pm local time, caused by helium balloons that’d been caught in a transformer across the street. Power was restored by kickoff, but it was purposely turned off again toward the end of the 1st quarter, apparently to switch over to a different transformer. Hilarity ensued, as that transformer also got a FAIL for the day when those same pesky balloons knocked it offline. Good to know the entire power infrastructure can be brought down by three freaking balloons. Terrorists take note. 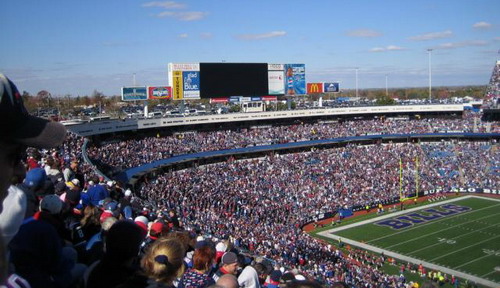 I’ve gotta say, I wish the power went out more often at these stadiums. Imagine being able to think clearly between plays without having to listen to the 800th commercial about Bison chip dip or the law firm of Siegel, Kelleher, Kahn, Manischewitz and Dingdong. It might’ve helped raise the football IQ of everyone in attendance as well, having to figure out down, distance, time left on the clock, and penalties themselves. I loved it. The downside? Pitch-black bathrooms. Needless to say, that was an adventure. Thank jebus for cell phones and their light-emitting properties.

Forgive the quality of this post, as I’m knocking some rust off after the site’s hiatus. But I’ll sum up by saying my excitement level for Buffalo sports this year is at “cautious optimism.” Give it another month and I’ll likely be up to “delirious fanaticism” so the Sabres and Bills can crush me again in the end. Forget that, though! The Bills are 5-1 and cookin’ with gas while their hockey brethren stand at 4-0-1. I sense good things in their futures. To paraphrase a friend, the Bills and their fans are due.

Check out the image gallery HERE.