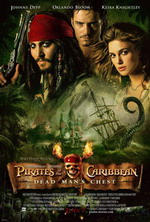 Picking up, more or less, right where the first Pirates left off, Dead Man’s Chest furthers the tale of the charming Captain Jack Sparrow and his honorable companions Will Turner and Elizabeth Swan. The same swashbuckling, adventurous tone of the first certainly carries over to the sequel, but it never seems to strike all the right notes the first one did. I can’t quite put my finger on exactly why that is, but it may lie with the fact that Dead Man’s Chest is a bit less lighthearted than the first was; or perhaps that it’s a bit too self-aware of what made the first movie good, and it goes out of its way to try and duplicate that–and not always successfully. It’s a vague and relatively minor quibble, but it keeps the 2nd flick just out of the class of the first.

The entire cast is back, along with a couple of new additions that makes screentime a precious commodity for all the actors. This causes a few pacing problems, having to dart back and forth between all of the many character arcs, sometimes cutting to a low-key conversation between two people immediately on the heels of an over-the-top action sequence. I think the editors would have done well to excise a few “character” moments from the film in the name of tightening up the plot. Said plot is, at best, confusing as well. It’s hard enough to figure out just what everyone is after, let alone having to do so while deciphering the many different accents each actor has. Jack Sparrow is after Davey Jones’ heart and wants to keep it, Will Turner wants the heart to kill it, Elizabeth Swan doesn’t know who she wants, Davey Jones wants Jack Sparrow’s soul, Commodore Norrington wants Elizabeth, but then wants the heart and his Naval career, Governor Swan wants a new wig…yada, yada, yada. I’ve done you the favor of summarizing the plot as coherently as possible (which is to say, not at all).

What carries the movie, though, is Depp’s Captain Jack Sparrow, and his portrayal as an eccentric pirate just left of normal. There does seem to be a questionable tendency on the part of the screenwriters to make him the object of admiration when his actions consistently undermine any possible honor or goodwill he is depicted as being deserving of. If there’s a false note with the character, it’s that. He’s not quite a good enough guy to warrant all the loyalty he seems to inspire at times. 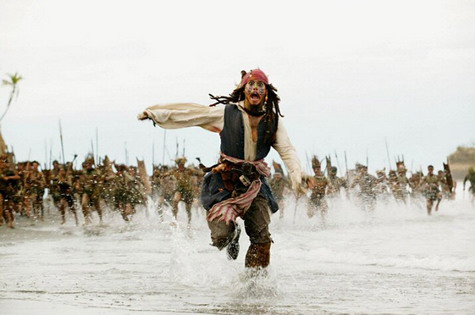 All this nonsense being said, if you were a fan of the first, you’ll no doubt find plenty to love about the second. Lots of adventure on the high seas, plenty of action sequences, and some great special effects, most notably the effects work done on Davey Jones and his crew. Each damned member has taken on the properties of various sealife (one’s becoming a hammerhead shark, another a barnacle, and Davey Jones himself is an octopus). Great effects work by ILM. Overall, the flick’s a bit darker in tone than the first, and there’s more emphasis on larger action setpieces as well. They all work pretty well, but the story seems to get in the way of the action at times. Not necessarily a great thing for a movie, but it skirts enough of an edge on the good side to keep you entertained.

I think, upon further reflection, that the problem with the movie is that the whole isn’t greater than the sum of its parts. You could watch individual scenes, out of order, from Dead Man’s Chest and fully believe each is fantastic and faithful to the original. Gore Verbinski’s direction is fantastic, the cinematography is fantastic, the stunts are fantastic, etc, etc. I can’t think of a single scene on its’ own that didn’t work–but when these pieces are all mashed together, it doesn’t fit quite right into the puzzle that is the entire film.

So what can you glean from this meandering, run-on sentence of a review? Plunk down your nine bucks to see the flick. Not quite as good as the original, but it has enough of the same yo-ho-ho pirate spirit of the first to come back for. Hopefully the same will be said for the 3rd flick, At World’s End, coming next summer.

One thought on “Pirates of the Caribbean: Dead Man's Chest | B+”