The third chapter in the swashbuckling extravaganza that is the Pirates of the Caribbean has hit theaters, and while it’s an amazing achievement in the realm of visual arts, it leaves a lot to be desired in the story and resonance departments. Weighing at a whopping 168 minutes, At World’s End is a bloated, effects-laden monstrosity; emblematic of the upper echelons of the Hollywood blockbuster.

I’ll spare you the details of the story, and since there really isn’t one, that won’t be too difficult. Every line of dialogue in the film could’ve been replaced with, “ARRRR!!!” or “AVAST, ME HEARTIES!!!” and it wouldn’t have made any difference in the audience’s understanding of what’s going on. Seriously, there’s no complicated plot details to get caught up in. It’s a convoluted skeleton of a story that serves only to get you to the next jaw-dropping special effects sequence. And therein lies the reason to see the movie. The effects are unbelievably good, and likely the best to ever come out of Hollywood thus far (all apologies to George “What Plot?” Lucas and his Star Wars prequels). 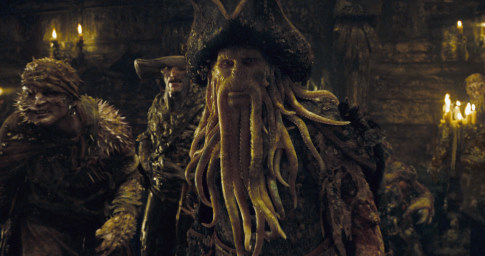 The cost of this movie must’ve been through the stratosphere, as the effects work can be seen in nearly every scene–from the nuanced character work on Davey Jones and the crew of the Flying Dutchman to the epic battles between pirate and East India Trading Co. ships. It’s everywhere and in huge heapings. It’s clear the studio and crew wanted to go all out and cram as many effects, stunts and explosions as they could. The movies have all been enormous hits at the box office, so they’re not counting every penny here–they’re throwing dump trucks of cash into the budget as fast as they can.

Unfortunately, the same vigor and zeal isn’t found in the script. As I said earlier, you could replace every line of dialogue with a cliched pirate utterance and it’d be much the same movie. There’s lots to ooh and aah at onscreen, but you never feel any connection with the characters, save Depp’s great performance as Cap’n Jack Sparrow, and as a result it’s never going to be a film that stays with you long after having left the theater. What story there is toward the beginning of the film does nothing more than bog down the pacing. There should have been at least 40 minutes cut out of the film, and you don’t have to be a professional film editor to find stuff to cut–the unnecessary stuff sticks out like a sore thumb, especially after your ass has gone numb from being in the theater almost three hours. (You’re welcome for that imagery.)

So, much like the second Pirates flick that didn’t live up to the balanced execution of the first, At World’s End is another rollercoaster effects ride–worth seeing in the theater as a summer blockbuster event to partake of, but don’t expect something that’ll resonate with you or your wallet in future viewings. Just like Dead Man’s Chest, it’s missing that extra, intangible “something” that made the first film so enjoyable upon its first and successive viewings.

2 thoughts on “Pirates of the Caribbean: At World's End | B”