Pre-set: Throw Your Arms Around Me (Ed solo), It Makes No Difference (Ed w/ My Morning Jacket)

Wow, where to begin. This show so far exceeded night one, quality-wise, that it does night two a disservice to even compare it. The Red Mosquito crew met up once again before the show, imbibing in the finest of ales as we all burned our faces off in the glaring, Philly sun. I had the good fortune to lodge in Cal Varnsen’s house the previous night. It was among the finest carpets I have ever had the pleasure to sleep on. Not only that, but he took us to Wendy’s the next day. I think we were all incredibly uncomfortable with Cal’s unnatural and disturbing love for Wendy’s food, but none of us dared say a word, lest we unleash his fury.

Some highlights from the pre-concert tailgate mainly all center around Dirty Frank, an orphan raised by drifters on the streets of Wilmington, Delaware. He greeted all of us with his trademark wit and fervor, calling all of us “motherf**kers” and “sons ‘a bitches.” It was all meant with love, though; a love magnified by his enormous vodka intake. 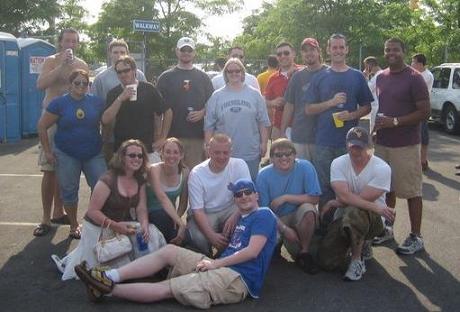 No one’s sure if Frank actually made it to the concert, as he may have been kidnapped by that Mexican family and taken to the border to have his kidneys harvested.

Anyway, after meeting up with Frank and a host of other great Red Mosquito folks, we finally make our way into the Tweeter Center, and make a beeline for the merchandise stand in an effort to snag the much sought-after show poster, which will immediately quadruple in value after it sells out (of course, I take mine home and spend forty bucks to get it framed). Standing in a packed-together-like-sardines line of sweaty Pearl Jam fans waiting to buy a 10-cent piece of paper for 25 bucks is an experience like no other. 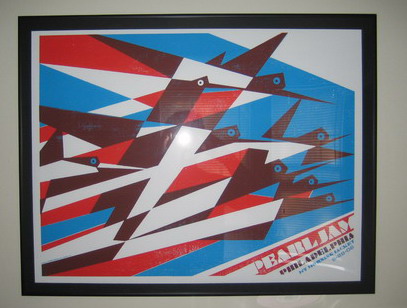 I did manage to get a poster, and was content in the fact that I’d once again emptied my wallet (but not before a beer and a hot pretzel….mmmm…salt…). We made our way into the ampitheater and started walking down the aisle toward the stage to get to our seats…and kept walking…and kept walking…7 rows back from the front of the stage, almost dead center, in front of Stone Gossard’s customary spot onstage. Needless to say, between the hot pretzel and my seat location, I was stoked. Yeah, “stoked.”

We settled in and were treated to another pre-set performance by Ed, singing the Hunters and Collectors’ “Throw Your Arms Around Me.” Great song to get everyone in the mood before My Morning Jacket took the stage to open. Ed sang the first song with them, and MMJ put on another great set–so great it almost makes me want to buy their albums and grow a long beard. (MMJ pic) Almost. 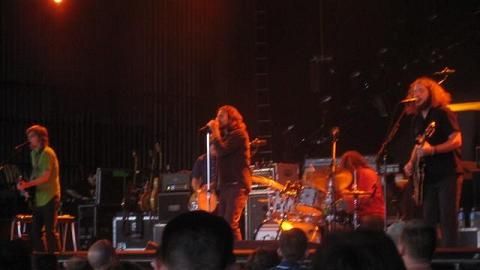 At some point after My Morning Jacket’s set, I navigated my way up to the back of the ampitheater seats and to the sound/light board in the center. I snagged a view of the setlist and was pleasantly surprised. 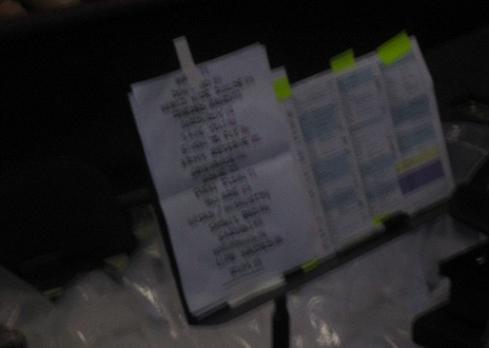 After last night’s somewhat–I say, somewhat–disappointing setlist, I was hoping for something special. Pearl Jam starting off with “Wash” was a good sign.

The band sits down for acoustic set to start the first encore, playing a “lovely” (as Cal would say) Parachutes for only the 2nd time this tour. A haunting “We Belong Together” tag on Black, with Ed’s appropriately ragged voice rasping out the lyrics, had the entire crowd moved. Look no further for an example of the kind of power music can have.

The rest of the show’s highlights:

We departed the venue and into the crisp, night air on such a high we nearly forgot that we were in the middle of Camden, NJ–murder capital of the universe. We made a quick getaway across the bridge, leaving another fantastic Pearl Jam show in our wake.

Lots of shifts in tense during this review; I hope I didn’t confuse anyone with my temporal flexibility. What? As for Pearl Jam, another fantastic tour, but I can only hope they come back to the States next year to play in Buffalo, site of one of the finest PJ shows ever in 2003. Until then, I will continue to write long-winded essays on the state of the world and my place in it.

Ed performs a preset of “Throw Your Arms Around Me” and stays on for a cover of The Band’s “It Makes No Difference”. Ed addressed the crowd right after “Wash”, saying “I bet you came over after church” which had the entire venue laughing and that “on the seventh day, God said ‘You shall rock your asses off until the cows come home'”. Ed is bothered by mic and mic-stand problems throughout the first set, breaking at least two. Ed dedicated “Army Reserve” to the men and women risking their lives and following orders. During “Rearviewmirror”, Ed is visibly annoyed at a photographer (or fan?) in the pit and aggressively throws a towel at him. Picking up a guitar to join the jam, he then breaks a string and throws his guitar down hard, leaving the stage. The band starts the first encore on the “lighter” side with “Wasted Reprise”, “Man of the Hour” and “Parachutes”. Mike had a line of new baseballs behind him on his equipment and Ed called attention to the fact that he was playing with “a lot of balls”. Mike went back and counted them – 5 balls – and Ed said that he had one of his removed to be able to hit the high notes. After over ten years of absence, “Leash” is played for the third show in a row. “Yellow Ledbetter” closes with Mike playing the “Star-Spangled Banner”.