Another great episode just in time for May sweeps. I’ve said it before–Locke-centric episodes always give the show the forward momentum that makes it so compelling to watch. Locke’s inability to kill his father was interesting in that it brought out the hypocrisy of the way Ben goes about his work on the island. He speaks of lists and “the good guys” and of virtue while kidnapping castaways, killing those who get in his way, and manipulating his “allies” to his own ends. I initially bought into the fact that he might just be testing Locke by dangling his father in front of him, and would reward him with a place among the Others if he didn’t go through with it. Instead, he was more interested in making Locke a murderer, as a “gesture [of Locke’s] free will and commitment” to the Others and their cause.

It’s another facet of Ben’s trying to maintain his increasingly tenuous role as the leader of his cult. His right-hand man, Dr. Alpert, didn’t seem to be buying Ben’s line of B.S. when he gave Locke the dossier on Sawyer. We’ve seen evidence of dissension since the first episode of the season, and I think it’ll be coming to a head in the next episode or two. The Others certainly seem primed for a messiah-like figure to rescue them from a leader that’s led them astray. The “special” Locke may be that guy. I envision some great scenarios in season four if Locke ends up replacing Ben as their leader. 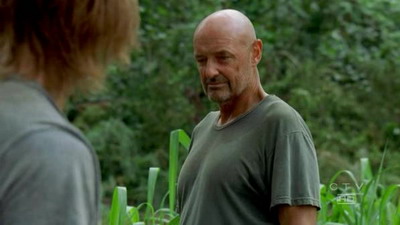 One thought on “One thing at a time”