After returning from an epic vacation with my girl, it occurs to me it’s been far too long since I’ve put together a full-fledged trip report. Alas, this report will probably be mainly bullet points and pictures, but take what you can get. You can view the full image galleries here or on Facebook. Enjoy. 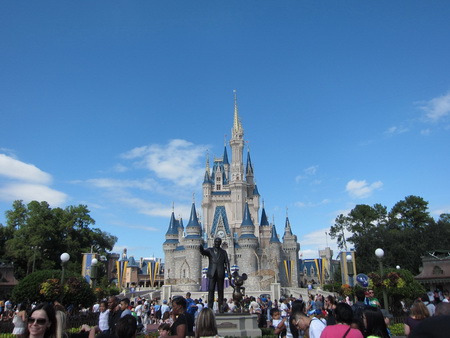 Day 0 – Arrival
I don’t remember much about “Arrival Day” except peeing our pants in excitement. I do not recommend peeing one’s pants on an airplane, even if it is Southwest.

Scratch my lack of memory — I do remember checking into the hotel and getting situated in our room at Disney’s All-Star Music Resort. This is regarded as the “value” hotel of the Disney World resorts (which range from the southern royalty excess of the Grand Floridian to the odorous economy of the Days Inn) but more than sufficed for our needs (i.e. somewhere to sleep and store our supply of chipz). 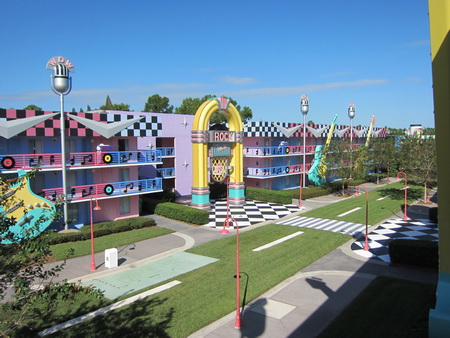 The rooms were done up so as to greet its guests in as welcoming a way as possible: with animals made of towels. 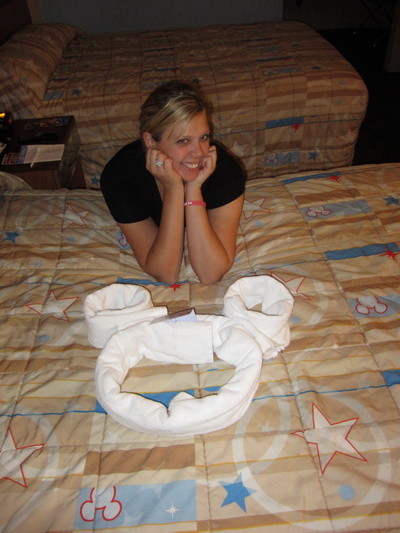 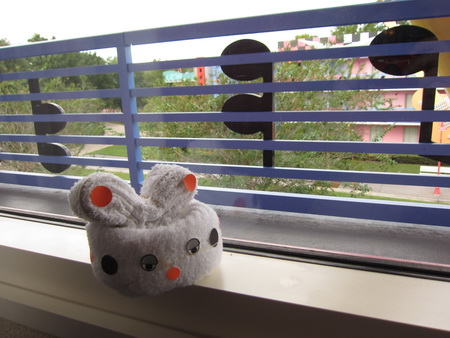 After unpacking and picking up some supplies at the local Target, we called it an early night so as to save our precious energy for a fun-filled day of “magic” in the parks on the ‘morrow. Oh yeah, and we got a pizza from a place called, “Flippers.” All this while driving around town in our Mafia-mobile, an off-white Chrysler 300 sure to earn us the wanton eyes of mobsters and gang members everywhere. Hi-yah. 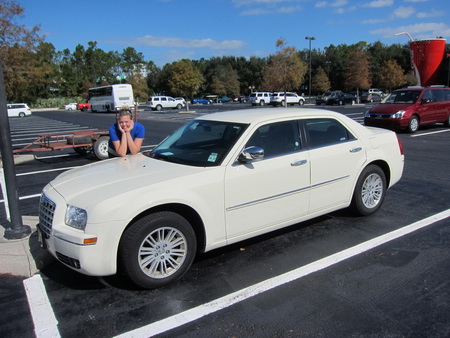 Day 1 – Magic Kingdom
Up early for a magical day at the magical Magic Kingdom at magic-filled Walt Disney World. Magical. 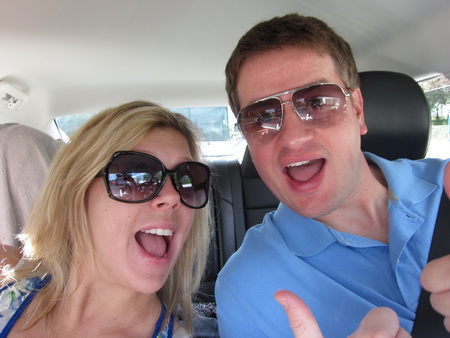 I’ve not been here in well over a decade, having opted for the comparatively “adult” confines of the Universal Studios parks when in Florida for a conference last year. I gotta say, though: seeing that “Magic Kingdom” sign overhead as you’re entering the park brings out that child inside of you, and the excitement was palpable. 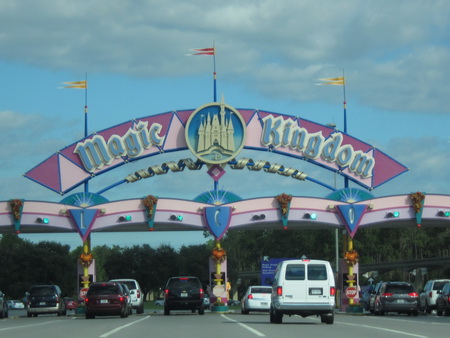 And by “excitement,” I mean “peeing our pants.” Yep, we have a real problem with incontinence* and it’s only Day 1. Melanie, who’d been here not too many months ago, was equally excited — I think she relished her impending role as tour guide since she’s not only been to the parks many times, but also worked at Epcot for a good chunk of time right out of college. I was hoping this would lead to a top secret tour of the “Disney Command Center,” which I envision as an underground, high-security bunker filled with state-of-the-art technology that allows engineers in charge to manage ride lines, detect system failures, and route toilet paper and Glade plug-ins to the more heavily-used bathrooms. (There’s gotta be frequent PowerPoint presentations on this at meetings in the Disney corporate offices, right?)

*You don’t really think we peed ourselves, right? Right?

After a short monorail trip from the parking lots to the park entrance, we were greeted upon entry with the “Move it, Shake it, Celebrate It!” welcoming parade that runs from the entrance to the base of Cinderella’s castle. And by “welcoming,” I mean “this song will get stuck in your head and run on a constant loop for the next 72 days until you’ve gone mad with Disney-itis and spend the entirety of your life savings on Walt Disney merchandise and hot dogs.” It wasn’t too bad the first time, though. 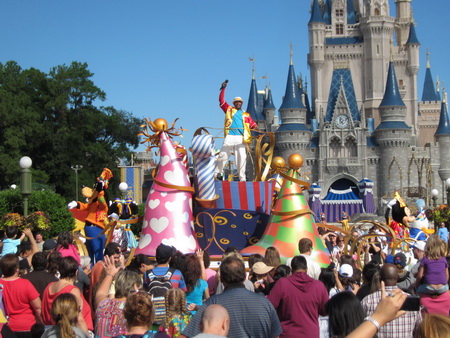 Plus, we got to meet Tinkerbell. 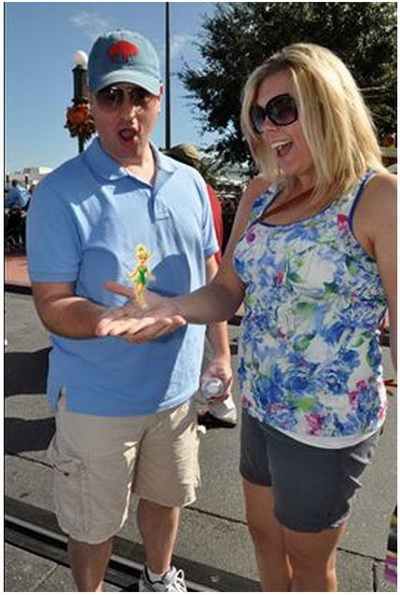 Upon entering the park, your eyes can’t help but be drawn to Cinderella’s castle at the end of Main Street, a sight sure to bring out the little kid in all of us. That visual touchpoint instantly invokes all the fond memories you had from past visits (funny how the interminable lines and irritable whining fades from those memories after time), priming you to get all wrapped up in the “magic” of that place. And primed to spend copious amounts of your money. 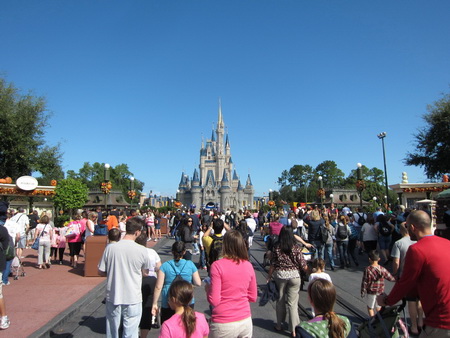 Figuring Splash Mountain would have among the longest lines of any ride, we quickly headed over to Frontierland to pick up “Fast Passes” before heading elsewhere. Fast Passes are an ingenious way to plan your day in the park and avoid long wait times as much as possible. Pick up your Fast Pass at the kiosk and simply come back to the ride at the time shown on the pass. (billymays)AMAZING!(/billymays) 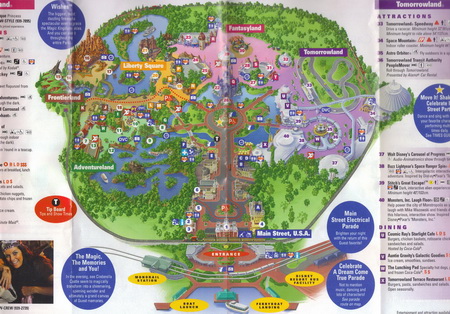 Our first ride of the day was the Jungle Cruise (also in Frontierland), and while I’d like to say the highlight were the atmospheric jungle confines with its variety of beautiful flora and fauna, the river cruise was instead punctuated by an overzealous mother highlighting each and every thing she saw to her clearly-exasperated child. “OOOOHHHH LOOK IT’S A BIG LEAF!!!! LOOK DEBBIE*, IT’S A BUTTERFLYYYYYYYYYYYYYYYYYYY!!!!!!!” 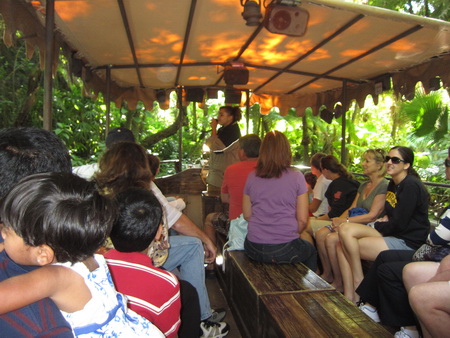 *I’m just going to assume the kid’s name was Debbie.

After hitting up Big Thunder Mountain coaster (no hilarious anecdotes to report), we escaped the wild frontier and headed back through the center of the park to Tomorrowland, where we picked up Fast Passes to Space Mountain before boarding the pulse-pounding Astro Orbiter. 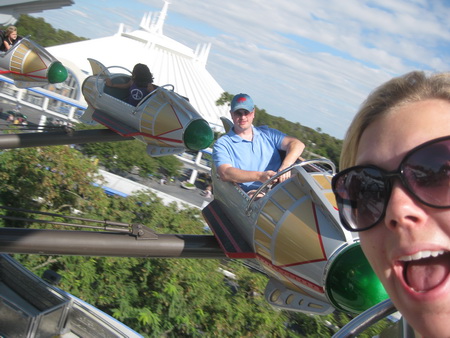 Thoroughly exhausted from the high-speed (3mph) ride high above the Magic Kingdom, we retired to a food stop near the entrance that featured hot dogs and–wait for it–corn dog nuggets, the latest in state-of-the-art culinary wizardry. They taste just as good as they look. Ahem. 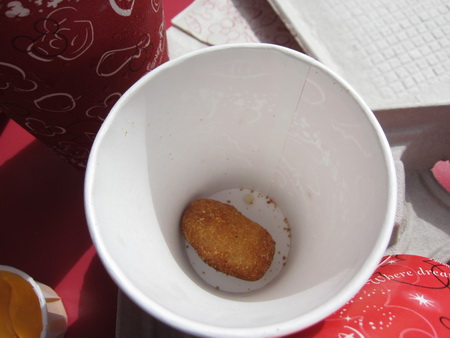 While eating our delicious dogz and nugs, we couldn’t help but observe the Magic Kingdom, in addition to the many rides, attractions, eateries, is chockful of these birds: 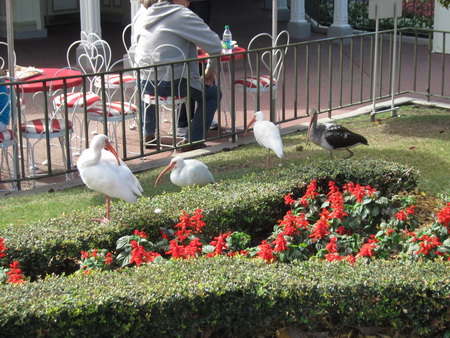 There is not a green space within the park that doesn’t house at least two or three of these long-beaked oddities. For whatever reason, we always felt particularly threatened whenever catching a glimpse of them — that beak lends itself to nefarious hijinx (i.e. sneakily stealing your chips). Speaking of beaks, among the other regular shows within the park featured the Disney characters you know and love (Mickey, Minnie, Donald and Goofy) sharing their thoughts on the power of dreams at the base of Cinderella’s castle. Aside from the power of dreamz, the key realization I came away from the show with is that Donald Duck is usually high on crack and dreams of nothing but dressing up like a pirate and fighting Captain Hook. And I love him for this. 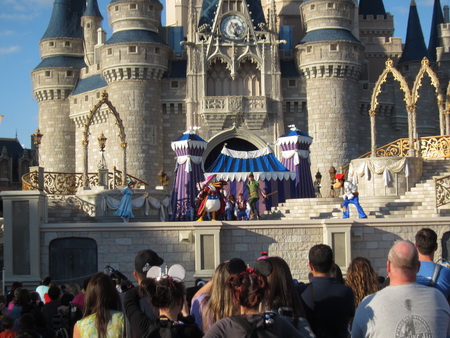 We then sought to speed up digestion of our food by heading to Space Mountain…the ride where everyone over 5-foot-8 grips the restraints in terror as they feel the ever-present threat of imminent decapitation every three seconds (Space Mountain is an indoor roller-coaster rocketing you along a track in almost complete darkness). I’m happy to report, however, Melanie and I still have our heads.

The remaining rides wizzed by:

Nearing a state of exhaustion, Melanie suggested we find a spot to stake out a good vantage point for the impending laser/video/fireworks show around Cinderella’s castle. What followed had my jaw dropping, as a wide array of graphics, colors and mind-blowing visual effects turned the castle into a 3-D movie of sorts that had everyone captivated. Disney’s imagineers really hit this one out of the proverbial and literal park.

Starting to be crushed by the onslaught of people moving into position for that night’s subsequent fireworks spectacular around the castle, we opted to cap our day off on quite possibly my favorite theme park ride ever: THE PEOPLEMOVER, a slow-moving tram ride that takes you through all the sections of Tomorrowland. This was the first of approximately thirteen trips we took on THE PEOPLEMOVER that week. I wish I had the words to do this ride justice….there are no words….they should’ve sent a poet.

We did catch some glimpses of the fireworks while on THE PEOPLEMOVER (another amazing feature of THE PEOPLEMOVER), and were able to relax in style after a non-stop day of magical excitement (no more pee yet).