My reaction to the latest Bills’ loss is not quite the typical “woe are the Bills/we suck/when will the misery end?” doomsaying that I’ve become far too accustomed to over the last 4-5 seasons of NFL Sundays. On the contrary, I’m utterly indifferent to it, and it’s not an altogether unpleasant feeling.

The past few years of Buffalo Bills football have largely been an exercise in futility, resulting in consistently unmet expectations and rising levels of alcoholism among Buffalo sports fans. What began as an apparently-promising era with the 31-0 victory over the Patriots in 2003 eventually spiraled into the despair-ridden depths of mediocrity, the likes of which hadn’t been seen around Buffalo since the 1980’s. All the talk and posturing during offseason workouts and training camps inevitably yielded to the reality that the Bills were a barely-average football team, destined to disappoint and crush dreams week after miserable week. It got to the point where I dreaded Sundays, knowing they would often end with that horrible feeling in the pit of your stomach that didn’t quite dissipate fully by the next week.

It is with that history that I entered the 2006 NFL season with a decidedly different mindset. Finally rid of arrogant, righteously indignant coaches and management, the 2006 Buffalo Bills enter the season without the ridiculous posturing of the past regimes (courtesy of Messrs. Donahoe, Mularkey, Williams, et al.) and an air of quiet confidence in the master plan for the team, at the hands of general manager Marv Levy and head coach Dick Jauron. The emphasis would be on building a team with a strong, character-based foundation that could win as just that: a team. Getting rid of nattering nabobs of negativity like Eric Moulds, Sam Adams and Mike Williams would result in a solid, team-first mentality more conducive to a winning attitude. So, in a nutshell, the Bills are rebuilding. 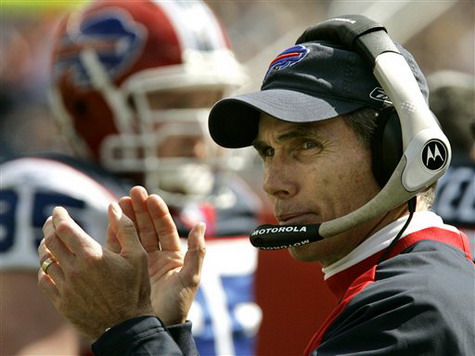 As with all rebuilding teams, expectations are set low, and my expectation for the team this season is somewhere in the 5-7 win range. With that in mind, I’m approaching each Sunday with an eye more toward developing a solid program with high-character players than simply winning. I sit here after a close loss to the Patriots without that sick, hollow feeling in my stomach. I’m pleased with a lot of what I saw of the Bills, mainly the speed on defense which led to a number of backfield pressures on Tom Brady and the Patriot running backs. Losman looked decent enough despite some problems with snaps and fumbles, but on the whole he appears to have his head in the right place. The offensive line, as ever, is medicore at best and will likely be the biggest reason for another sub-.500 season.

There is still plenty of room for hope. I think a much-needed emphasis will finally be placed upon acquiring talent for a solid offensive line by Marv, who is intimately familiar with what a top-flight offensive line can do for your team (see: ’90-96 Buffalo Bills). I have faith that, in time, he will put together a line that will give JP the time he needs to show he can be a good NFL quarterback, and a line that can give running back Willis McGahee the holes he needs to meet his self-proclaimed status as the “best back in the NFL.” The players added in the draft this year, safety Donte Whitner and defensive tackle John McCargo most notably, look to be of the ilk of solid, character players who can step into the roles soon-to-be vacated by aging veterans like Troy Vincent and Larry Triplett. With cornerback Nate Clements likely leaving Buffalo to hit a big payday, it’ll be important for 3rd round pick Ashton Youboty to step up at the CB spot as well. 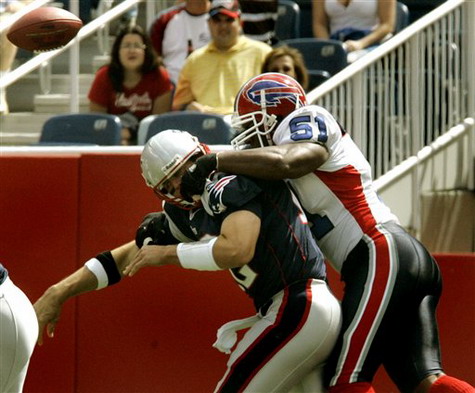 So, while it’s another losing Sunday for the Bills, my outlook is a 180Â° turnaround from seasons past. After the great start to the game with London Fletcher-Baker’s touchdown after a Takeo Spikes-forced fumble, it was tantalizing to think the Bills could pull out the win. I knew better and with my already-set expectations, the eventual loss didn’t have much of an impact on my day. Instead of sitting inside pissed off, I’m gonna finish this post and go outside to enjoy the rest of the day. I think it’s quite possible that the dark and bitter past of the early 2000’s will give way to a hopeful future in which the Buffalo Bills will still be a relevant topic of conversation come future Januarys.