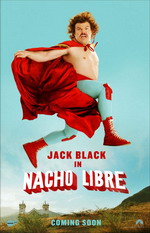 The second flick from Napoleon Dynamite director Jared Hess has much of the same understated hilarity, but with a stronger lead in Jack Black’s Ignacio, a friar/cook at a monastery who moonlights as a ‘luchador’–a Mexican wrestler dubbed “Nacho.” There’s an inherent “sweetness” to the film that keeps it from being an over-the-top Jack Black laughfest (a la School of Rock or Saving Silverman) that center around his trying to help the orphans living in the monastery by using his winnings to buy fresh ingredients for his meals, but there are plenty of moments that result in much busting of the gut throughout the flick.

Jack Black, sweetness notwithstanding, is at the peak of his talents here, whether flying over the handlebars of his motorbike/tricycle during a horrible accident or wooing the saintly Sister Encarnacion at the monastery. His sidekick is also adept at throwing corn-on-the-cob-on-a-stick. I just thought I’d throw that in there. The scenes in the wrestling ring allow Black to really cut loose, as he gallavants around the ring in a fashion strangely reminiscent of his onstage antics as part of his band Tenacious D. I think my favorite scene, which will make no sense until you’ve seen the flick, is Nacho’s construction of a lean-to while in exile, cobbled together from an assortment of driftwood. He simply sits down within it and the laughter commences. You’ll just have to take my word for it.

I don’t have a lot more to say about it, other than to say it’s well worth checking out. Black has expanded his abilities a bit in Nacho Libre, playing a true character this time around, rather than making a character out of an average guy. Okay, that makes absolutely no sense and I should edit this post to completely excise that last sentence, but I won’t–because of my commitment to the readers. I will not shield you from the mistakes of this once-infallible author. You should bow in honor of my ultimate humility. Anyway, go see da Nacho. You won’t be sorry.