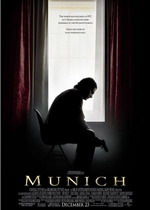 If I were in the cliche business of writing movie poster taglines, I’d call Munich a “taut, edge-of-your-seat thriller.” And it is just that, though I think it does a disservice to the movie to try and pigeonhole it into the “action thriller” genre, as it is much more. The basic plot follows an Israeli Mossad agent and 4-man team’s functioning as a covert cell sent by the Israeli government to exact revenge for the deaths of the Israeli athletes at the 1972 Olympic Games in Munich. Along with all of the movie’s exciting action and drama, Spielberg clearly was trying to send a message with the flick, about the futility of the seemingly endless struggle between Israeli Zionists and the Arab Palestinians hellbent on destroying each other so they can simply have someplace they call “home.”

But as history has shown us, violence only begets more violence; and revenge against the terrorist group that killed the Israeli athletes at the Olympics, in this case, only begets more revenge. It’s a cautionary tale-of-sorts, but it still has significance today, as the conflict between the Arab world and Israel continues to rage. In terms of the film itself, from the superb acting (Eric Bana in particular) to John Williams’ score to Spielberg’s deft directorial hand, there’s never a false note here. Absolutely one of the best films of 2005, Munich will be sure to garner a lot of attention for the Academy Awards next year.