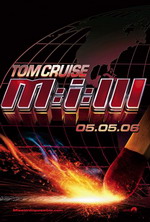 Exactly what the doctor ordered in terms of mindless, summer entertainment. But don’t expect much more than that, as the crew isn’t exactly reinventing the wheel here. The Mission: Impossible movie franchise has been much maligned over the years: Brian de Palma’s first movie was thought to be too confusing (just what you’d expect from the general idiot, moviegoing populace–of course, whoever comes to my site is excluded from that generalization), and John Woo’s sequel was actually a music video highlighting Tom Cruise’s ability to fly through the air in slow motion while firing multiple guns. I loved the first flick and think it’s the standard by which all future M:I movies should be judged. It has the team aspect that made the original TV series what it was, along with some great suspense and mystery. Alas, Mission: Impossible III is somewhere in between I (A-) and II (D+).

The team aspect is certainly back, including the return of Ving Rhames’ Lester Stickel character, who was relegated to flying around in a helicopter for about 5 minutes of the second movie. But, in the end, it’s The Tom Cruise Show, as he repeatedly defies death in the course of outrageous stunts all by himself. Of course, there’s the sterotypical “guy in the van with computer” who can hack into any system in a matter of 30 seconds, backing him up.

All of the action sequences are top notch and have some stuff you’ve never really seen before, which is hard to do these days. The acting is alright, but the characters are all secondary to the explosions, which is where M:I3 doesn’t hold up well to the original. All of the dialogue and conversations between characters feels simply like a means to kill time until the next big gun battle or explosion. Fortunately, the gun battles and explosions are so good that you won’t really mind.

J.J. Abrams’ direction (of TV’s Felicity, Alias, Lost) is pretty damn good for his first time out in film, and the plot he came up with is pretty decent as well. That being said, his penchant for touchy-feely relationship moments (the downfall of Alias) is on full display here, giving Cruise’s Ethan Hunt a serious romantic relationship for the first time. It gives the viewer opportunity for a bit more emotional investment in the story, but in the end, it’s wholly unnecessary. It just gets in the way of the explosions. And that’s the reason to see M:I 3–along with the outrageous stunts, gunfights, and nasally-implanted time bombs. Worth seeing on the big screen if you’ve got two hours to kill and don’t feel like thinking.