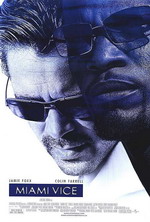 Michael Mann scores again with the updated film version of the TV show he created in 80’s, Miami Vice. Standing in for Don Johnson and Phillip Michael Thomas are Colin Farrell and Jamie Foxx as Miami-Dade vice cops “Sonny” Crockett and Ricardo Tubbs, respectively. The two are played much more seriously by Farrell and Foxx, leaving much of the charm Johnson and Thomas had in the TV series by the wayside. That’s made up for with some solid acting and Mann’s direction. Dare I say it? Mann is the best director working in the industry right now. Well, maybe not the best, but certainly tops on my list.

The flick strives to be the very embodiment of the word “cool,” but instead of coming off as elitist preening, Mann makes it work with his no-nonsense approach regardless of what’s onscreen–whether it be a large-scale, dynamic gun battle in a shipyard or a simple conversation between characters. The grainy look of the film (it was shot on HD video) lends the picture a realism that could easily be lost in the pink lights and palm trees of Miami. 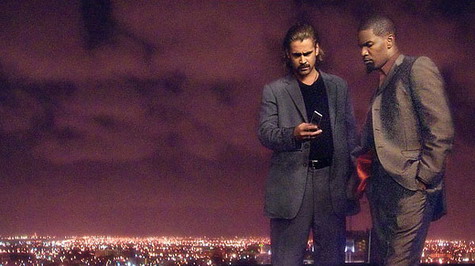 It’s fortunate that Mann directed the script he wrote, as his directorial skills seem to outweigh his writing this time around. Some of the dialogue is laughable if you examine it closely; raising the cheese quotient a bit if you think too much about it. In fact, I think the movie could work incredibly well if there was no dialogue at all. Mann is a true artist, getting some breathtaking shots of Miami and South America that have to be seen to be believed–lush tropical waterfalls, sweeping ocean vistas, or amongst the clouds while following aircraft. Almost as affecting is the composition of everyday shots of people just talking. Mann has a way of making the viewer feel like you’re right there in the scene with the actor, floating in and out of the action.

In terms of those actors, Miami Vice is largely Farrell’s movie; the publicized difficulties between Foxx and Farrell on the set during the shoot make a bit of sense in light of that. Foxx doesn’t get to do a whole lot other than shoot off a couple of one-liners delivered as if he were half-asleep, with a look on his face that makes it seem as if he just smelled a fart. Aside from that revelation, don’t expect too much in the way of background or character development here. Both Crockett and Tubbs (Crockett a little moreso, perhaps) are indentured to their jobs. They don’t get any downtime, and thus we don’t really get to know too much about them. That’s not a big deal here, but it becomes hard to identify with them on any level. (Unless you, too, are indentured to your job, routinely wear silk suits and drive around in high-powered speedboats.) 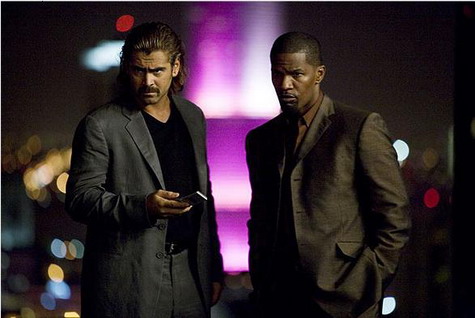 What he fails to deliver with dialogue and development, Mann more than makes up for with his action sequences. It’s not quite as good as the bank shootout in Heat, but the gun battle in the shipyard is intense, gritty, in-your-face and pulls no punches. (Insert another cliche here.) It’s a minor detail, but Mann doesn’t use “movie gunshot” sound effects in postproduction. He uses the actual sound of the weapons being fired. It may not seem like much, but you’ll immediately notice the difference when you hear these guns firing in staccato symphonies during the gunfights. It’s almost uncomfortable to hear–as you feel like you’re right in the middle of the action, bullets seem to be whizzing by your head (for God’s sake, make sure you see this in a theater with decent sound). 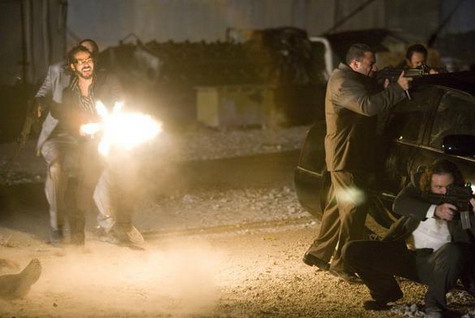 Speaking of sound, there’s a pretty damn good soundtrack here as well. I was particularly enamored of the Chris Cornell tracks (possibly Audioslave) sprinkled throughout. Mann seems to be pretty hip in his choice of music (or at least hires people with that sensibility) and it works very well in the movie. I wasn’t so enamored with Nonpoint’s terrible cover of Phil Collins’ “In the Air Tonight.” Awful, awful, awful nÃ¼-metal garbage.

So, Miami Vice is pretty much what you’d expect. The original TV series wasn’t exactly an in-depth character study of undercover vice cops, and neither is the movie. They don’t need to be. The film comes dangerously close to being something of a vanity project for those involved, with the actors skirting the line between real acting and male modeling. But under the strong directorial hand of Mann, what you’ll get is a taut, intenese action drama shot by one of the greatest directors of our time. Check it out. And if audiences do that, I’m sure you can expect a sequel, as the story certainly leaves that possibility open. Miami Vice 2: Montoya’s Revenge!