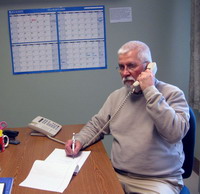 Jim recalls, ”At this point, I wasn’t too surprised as I practically diagnosed myself via the Internet.”

”I’m still on it and it appears to be working,” he noted, adding that it ultimately was approved by the Federal Drug Administration and is now available by prescription around the world. ”It’s expensive,” he added, but he is in better shape today than he was in the fall of 2005.

One may wonder why Jim Fischer tells his story whenever he can. His answer stresses the disadvantage of having a mysterious malady while living in Chautauqua County and having no place nearby to have it diagnosed.

”The drawback is the distance you have to go to get to a physician who can diagnose the problem because there is no neurologist here who specializes in Parkinson’s, as well as other movement disorders,” he said.

Not one to sit around and feel sorry for himself, Jim decided to help others and started a support group at Westfield Memorial Hospital. He now can count two more – the Chautauqua County Home in Dunkirk and St. Luke’s Episcopal Church in Jamestown. All groups welcome patients and caregivers.

During this time, Jim’s foremost thought was to establish a clinic locally for those who need diagnosis and treatment. Although there have been no demographic studies conducted in the county, his search has prompted him to estimate that more than 1,000 residents have been afflicted with Parkinson’s.

”Most of the complaints I hear are from people who are forced to travel some distance to see a neurologist specializing in Parkinson’s. They want to get questions answered about symptom changes and medications. The distances they have to travel also is a problem, as well.” he explains, noting that public transportation is lacking.

”Having a local comprehensive clinic would solve many of these problems,” Fischer noted in 2008. ”Additionally, a readily accessible clinic would help many patients to remain at home. This makes a lot of sense clinically, as well as financially; currently residential treatment costs about $47,000 a year, while the cost of being treated in your home is about $20,000 annually.”

With his objective to establish a clinic, Jim headed for the Westfield hospital. Stuart Williams, the hospital’s former president and chief executive officer, added his support and found space for the support group. During the hospital transition in 2007, Williams didn’t forget to tell Karen Surkala, now hospital vice president.

He told Ms. Surkala that he envisioned the founding of a ”full-service” treatment clinic where patients would have an available physician and other services to evaluate patient needs, and to link these individuals with the services they need, many of which are already available.

Subsequently, a grant proposal was submitted to the American Parkinson Disease Association to establish an Information and Referral Center at the hospital.

The next step to enhance Fischer’s goal would be to establish a clinic that would have a nurse-navigator whose responsibilities would include meeting with patients at the point of diagnosis or referral, identifying any barriers or potential barriers to care, linking patients, caregivers and families with appropriate follow-up services and maintaining personal contact with patients throughout the health care continuum and following their progress – in essence, steering the patient along the right path.

Jim Fischer continues to keep up the good fight. Although a $30,000 grant from APDA allows part of his ”wish” list to be filled, he will continue to make sure that everything possible to be done to serve those with Parkinson’s disorders is put into motion.