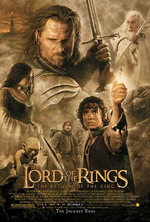 The conclusion to the Lord of the Rings saga clocks in at a hefty 3.5+ hours, but it seemed to fly by when I saw it the first time. It’s hard to imagine how Peter Jackson could conclude all of the story threads started throughout the previous two films, but amazingly enough, he pulls it off with flying colors. The battle on the plains in front of Minas Tirith will likely go down as the greatest battle sequence ever put to celluloid (at least, the greatest battle created within a computer), and the acting in Return of the King is perhaps the strongest of any of the three Rings films. There’s not a lot I can say that hasn’t already been said about these flicks, but the heaps of praise and awards these films have garnered are more than deserved.