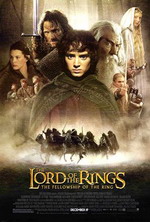 The first chapter in the Lord of the Rings movie saga, much of Fellowship is spent introducing us to Middle Earth and its characters, chiefly those will become the entitled fellowship. It is difficult to imagine the confluence of events and luck to result in such a nearly perfect fantasy epic, with everything from casting to the music to the locations to the acting being almost note-perfect. It’s an enormous achievement visually. Despite it being the introductory chapter to a huge film saga, it stands on its own as a fantastic film. Regardless of whether you like fantasy films, of have read the books, Fellowship of the Ring is worth seeing simply as a monument to what film production at its finest can be.