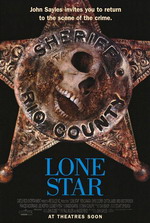 Ambling along at a Midwestern pace, John Sayles’ Lone Star takes its time telling the story of a small-town sheriff investigating the possible, decades-old murder of the town’s sadistic ex-sheriff; all while living in the shadow of his legendary father, a former sheriff himself. That’s a lotta sheriffs.

There’s a lot to take issue with the execution of the film itself: the direction is nothing special–you’re gonna get some pretty standard, static shots most of the time; and the acting can be spotty at times. And there’s a twist toward the end of the flick that is sure to induce much cringing and dry heaving (I know, I know, you can go ahead and file Lone Star under the “must-see” category now) But what makes the flick worth watching is the story itself. It’s a detective yarn that occurs in parallel timelines: the present and the past. Chris Cooper plays the Rio County’s sheriff in the present, while Matthew McConaughey plays his father, also the sheriff, in the past. What ties them together is the disappearance of McConaughey’s brutal predecessor, Charlie Wade (Kristofferson). The body of the latter is found at the beginning of the film, sparking an investigation as to just how he died.

In a more abstract sense, Lone Star is about the ever-changing perceptions of past events and how they can be revised to the point that it seems like historical figures are boiled down to the standard archetypes of “hero” and “villain.” The problem with such archetypes is they often conceal or mask the complexities found within everyone, to the point that one can’t even sort out truth from fact when it comes to describing the person. Such is the case with Cooper’s father, a man regarded as able to do no wrong, despite mounting evidence to the contrary throughout the flick. In the course of investigating the murder, Cooper’s character struggles to reconcile the town’s hero worship of his father with the strained relationship he had with him as a child. In the process, Lone Star tells a story of race, of history, of fathers and sons, mothers and daughters, and the changing face of America. Driven by a solid plot, it overcomes any execution problems by being wholly interesting and engaging.