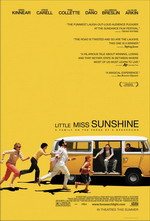 I’ve moaned repeatedly about that aspect of Hollywood in past reviews, so I shan’t belabor the point any further. The movie, then. While it can certainly be dark in tone much of the time, there’s an inherent sweetness at the core of Sunshine that allows it to skirt a fine line between utter depression and unbridled hilarity quite successfully. It is a comedy, after all. Steve Carrell turns in an unexpectedly subtle yet still hilarious performance as Olive’s depressed Uncle Frank, and is backed up by equally great performance by Greg Kinnear, Toni Collete, Adam Arkin, Paul Dano, and especially Abigail Breslin as Olive. 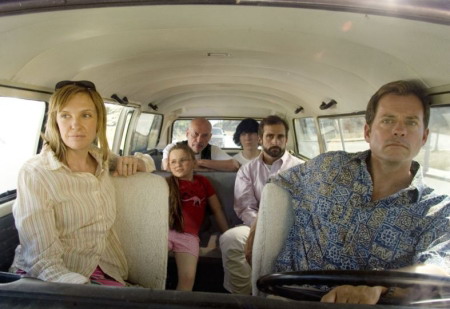 The script, as mentioned, is great, and most comedies don’t have as many laugh-out-loud moments as Sunshine does. Arkin is great as the cantankerous, old grandfather (great adjectives you’re using, Jeff), Carrell–as mentioned–is great, and the rest of the cast more than holds up their end of the deal. The beauty pageant at the film’s climax is at once both incredibly creepy and side-splitting (you’ll understand what I mean when you see it) and so completely unexpected that you just might giggle in delight (I can neither confirm nor deny that I “giggled,” but I can definitely confirm that I’ve used far too many parentheses in this paragraph).

If you haven’t seen it yet, worry not, it’s out on DVD, and I urge you to divert some of those hard-earned funds of yours toward a rental or purchase of Little Miss Sunshine instead of the latest cookie-cutter popcorn flick off the Hollywood assembly line. The dough’s well worth it for what might just be the best film of 2006.

2 thoughts on “Little Miss Sunshine | A+”