Writer/director Shane Black, who I’ll always remember fondly from his role as Sgt. Hawkins in Predator, has had a solid career as a screenwriter in Hollywood, most notably penning the Lethal Weapon movies. He’s a great writer, though his strengths lean more toward snappy dialogue than coherent plotting. Kiss Kiss, Bang Bang is a perfect example of that strength and weakness. It’s got dialogue so crisp and entertaining that you’ll be repeating lines well after seeing the film, but a meandering mess of a plot that one will struggle to make sense of well after seeing the film.

The actors certainly appear to be having a great time with all that dialogue as well. Downey, Jr. and Kilmer deliver their lines with such obvious enthusiasm that everyday life on the set must’ve been a hoot.

We now pause for reflection after such blindingly fantastic use of the word, “hoot.” 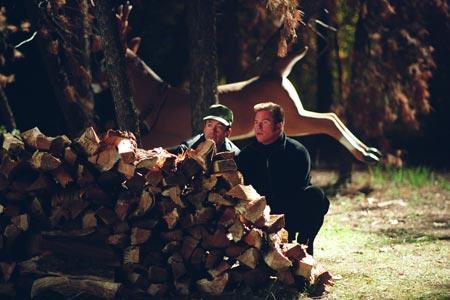 Anyway, while the dialogue and acting is so very entertaining, the plot–about a bumbling theif (Downey) who is inadvertently discovered by film casting directors and shipped off to Hollywood where he soon becomes embroiled in solving a murder mystery whilst falling in love with his High School “sweetheart”–falls a bit flat. I often enjoy being thrown into a plot not knowing quite what’s going on–but that’s all with the expectation that everything will be explained a bit more adequately as the film develops. Not so here. By the end of the movie, I’m left remembering a few great lines of dialogue, visions of a smoking hot Michelle Monaghan spending much of her screen time naked, and an unfortunate mental picture of that freaky-looking mole/abscess on the side of Val Kilmer’s face seared into my consciousness.

There’s some narration throughout much of the film from Downey’s character, but that unfortunately doesn’t make what’s going on any clearer. Black seemed to be all over the map with the tone he was going for, ranging from an Elmore Leonard-like hipster cool to Lethal Weapon-style action to slapstick hijinx Steve Urkel would be proud of. There’s a bit of the old “breaking-the-fourth-wall” technique used a number of times while Downey speaks directly to the audience. That can work well, depending on the movie, but it’s a bit of an unnecessary distraction in Kiss Kiss, Bang Bang.

At the end of the day, it’s all entertaining and very much worth seeing. I’d like to see Black continue to make off-beat films like this, if for no other reason than he creates great characters with great dialogue. He may need a little help in the plot and direction departments, but I look forward to his next flick.