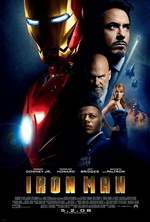 Storied comic book hero + crew respectful of source material + great actors – Hollywood = a nearly perfect movie. Iron Man, based on the long-running comic book series of the same name, comes to the screen having been bankrolled and produced solely by Marvel Entertainment. This is a big endeavour for a non-Hollywood entity. Marvel Comics being the group from whence the comic originated, and having seen the dreck that sometimes results from Hollywood comic book adaptations (see: Ghost Rider, Captain America, The Punisher, X-Men 3, etc.), they took it upon themselves to make sure the ironclad warrior got the proper big-screen treatment.

Jon Favreau is the ultimate reason it succeeds. His respect for the source material is clearly evident, from script to screen. Geeked-out comic book fans are very particular about their film adaptations, and if they can tell you’re messing around with fundamental aspects of their favorite characters, there will be hell to pay (in the form of myriad online message board posts proclaiming an urge to set the director on fire). A film without that kind of respect could still do well at the box office (Ghost Rider), but the bad publicity essentially kills any potential for a franchise (again, Ghost Rider). I think it’s safe to say we’ll have an Iron Man 2 in theaters in a year or two.

The casting is always important for these types of flicks; fans have a specific image or idea of the characters in their head. Comic books being a visual medium, there’s not the room for interpretation that you might have with a well-known novel, where character and local appearances can be largely in the reader’s imagination. Tony Stark, the man behind the armor, is an ultra-wealthy, egotistical, debonair playboy with a serious drinking problem in the books, who finds himself attacked and kidnapped while performing a demonstration the Stark Industries-manufactured weapons systems abroad. During the attack, his chest is pierced by shrapnel from a missile and is kept alive, through the efforts of an also-kidnapped physicist, by an electromagnet stuck to his chest, preventing the shrapnel from reaching his heart.

Downey, Jr. is one of the best actors working today, his past drug problems notwithstanding, and he’s perfect for the role of Stark. In fact, one could argue that his background as an addict makes him even more perfect for Stark, an alcoholic. Half the battle in winning fans over is good casting, and Favreau nailed it with Downey. The casting for the other roles, while important, isn’t as critical, so long as good actors are cast for the parts. Jeff Bridges might be my favorite actor at the moment, and I love watching him onscreen, whether it’s a simple conversation about business or as a raving lunatic out to get Stark. This isn’t necessarily an “actor’s movie,” but Bridges manages to dispel the notion that less-than-Oscar-caliber dialogue means your performance will suffer. Gwyneth Paltrow doesn’t have much to do, but she’s hot, which is extremely important. The Oscar-winning Terence Howard plays Stark’s best friend, who will play a larger role in future flicks, is relegated to a lot of cell phone conversation, but man–he had me convinced that he was actually talking to someone on the other end of the phone. Zounds!

The special effects work is spectacular. From what I hear, though, a lot more of the stuff you see onscreen is real than computer-generated, which is amazing in its own right. The all-important suit of armor Stark dons is nearly a spot-on match to the comic, with a few modifications for the sake of realism. 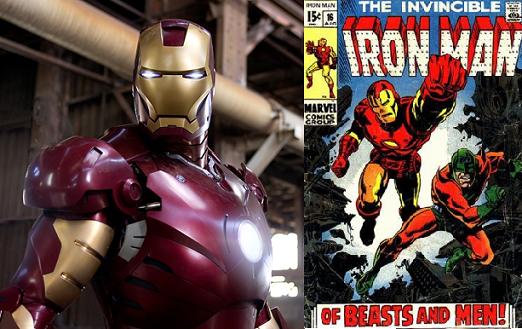 In the more obvious computer-generated scenes, the armor looks almost photorealistic enough to convince you that you’re actually seeing a guy in a metal suit in a dogfight with two fighter jets. Amazing stuff in a movie that certainly doesn’t rely on computer effects alone to entertain. There’s a surprising amount of humor throughout, led by Downey, Jr.’s sarcastic, scotch-aided wit.

I, as a long-standing member of geekdom everywhere, can’t wait for another Iron Man flick, and let’s hope Marvel continues to take charge of its properties. I think this will make enough at the box office to maintain the type of financing needed for independent, big-budget adaptations of their work. And if the scene after the credits is any indication, we might see the red-and-gold warrior in a movie other than Iron Man 2 as well. Bring it on.