The Buffalo Sabres went into Game 7 of the 2005-06 Eastern Conference finals down four starting defensemen and hanging onto the prospects of reaching the Cup Finals by the skin of their teeth. They entered the 3rd period up a goal despite seemingly insurmountable odds, before ultimately losing in a valiant effort against the Carolina Hurricanes. Since the moment the final horn sounded in that game, the team has had an intense, singular goal of reaching the Finals and finally claiming the championship that this city has desperately sought after for so very long. Wide Right, No Goal, Music City Miracle, No Goal II; the list goes on in the annals of Buffalo sports misery. This was the year Buffalo would shed the burdensome label of all-time “loser” and finally winning it all for the city that’s lived and died with its’ sports teams.

The Sabres started the season on fire, winning ten straight and dominating the early parts of the season as they soared to the top of the league standings. It was clear they had a dead-set focus on winning the Cup from the get-go; come hell or high-water, they would do whatever it took to win it all. Sometime after the All-Star break, however, the team stopped, took a look around, and realizing they had easily dominated the competition and led the league from the very beginning, thought themselves invincible and capable of winning any game whenever they felt like turning the proverbial “switch” on.

Well, that worked for most of the season–and it’s unfortunate that it did, because the Sabres seemingly though they could turn it on at will once they reached the postseason. They won hard-fought series victories over the Islanders and Rangers in rounds one and two–much more hard-fought than the President’s Trophy winners should have had to deal with. Instead of respecting the skin-of-their-teeth victories in those two rounds and finally acknowledging they needed a wake-up call, their mindset was probably best summed up by team captain Chris Drury, who told the media after the clincher in the Ranger series, “hey, we reached the conference finals; we must be doing something right.”

Well, Chris and his teammates followed that up by laying down like dogs in Games 1, 2 and 3 of the conference finals, giving Ottawa a (what would turn out to be) insurmountable lead. They battled hard in Game 4 and played pretty evenly in Game 5, but it was simply too late for miracles. A last second goal by Drury or Briere couldn’t save them this time. Too much time spent looking for fancy, behind-the back passes or dekes instead of sound, fundamental hockey. Dump the puck in, forecheck, crash the net. They weren’t willing to pay any considerable price to win a hockey game, and they paid dearly for it. And now it’s all over. Another offseason beginning on a sour note. 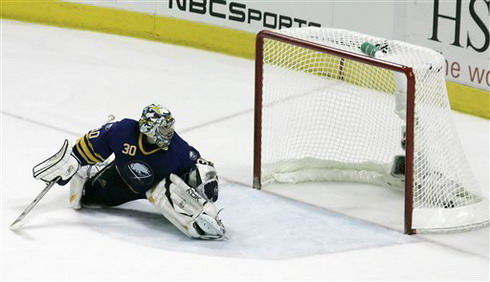 I’m not sure I’ve ever been more disillusioned or depressed after the end of a Buffalo sports team’ season. They didn’t lose because of a flukey call or bad officiating–they lost this series because they didn’t want it as much as their opponent did. I can’t think of a worse way to end a season–because the other team simply cared enough to put forth maximum effort when it counted the most while you sat back and watched. There was no amount of switch-flipping that would’ve changed the outcome of this series. Buffalo was outplayed from minute one and it would’ve been outrageous had they advanced to the Cup Finals after the pathetic effort in Games 1-3.

There was no one on the team that stood up and took their teammates to task for that effort; no one stood up in the locker room and demanded accountability from their teammates. At no time during the season was the impact of the loss of forward Mike Grier and defenseman Jay McKee more apparent than in the playoffs. Those two were the Sabres most vocal leaders during last year’s playoffs, both accepting nothing less than 200% effort from their linemates. It’s spilled milk now, but I am virtually certain the Sabres would not be working on their golf game now if those two were still on the team. There’s sure to be some changeover this coming offseason, with either Daniel Briere or Chris Drury cashing in on free agency with another team. For my money, I’d keep Drury and let Briere go. He did next to nothing in this postseason, and doesn’t have the size to exert any kind of will in the face of an overly physical opponent. Nevertheless, the Sabres also need to get tougher on the blue line. As much fun as it was to watch the team roll four skilled lines and throw a defenseman in on the rush during the regular season, that style of play won’t win you a Stanley Cup. Time to get gritty.

And so we speak the eternal mantra of the Buffalo sports fan: “there’s always next year.” As I’ve said far too often, I’m ready for “next year” to be this year. There’s so much more I could say about the coaching and bad karma (search the Buffalo News for the story about the Sabres assistance coaches locking the Sens coaches out of the elevator at HSBC) and half-assed effort, but it hurts too much to elaborate any more. It’s over. It was the same way after Game 7 of the Carolina series, but somewhere along the line, the Sabres forgot the pain they experienced in that loss. Had they remembered that, we might be in a vastly different situation right now. 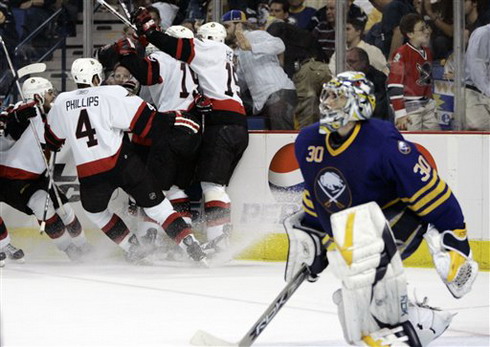 There’s the lasting image of the 2006-07 Sabres season, Buffalo. Let’s hope the team doesn’t forget it this time next year.

One thought on “I will now crawl into a spider-hole and die.”